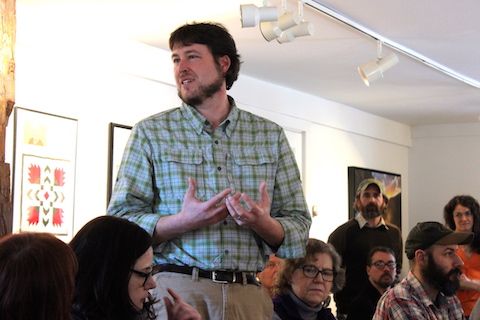 Above: Aaron Bennett speaks about the East Branch of the Delaware River at a lively forum about outdoor recreation and economic development in the Catskills on Saturday, Feb. 27. Photos by Rebecca Andre.

Dozens of Catskills residents attended the second of a four-part series of economic growth forums took place on Saturday, Feb. 27 at the Catskill Center for Conservation and Development in the Delaware County hamlet of Arkville.

Fifty-two people attended the forum—more than double the attendance at January’s event—to discuss outdoor recreation being key to economic development in the Catskills.

Geddy Sveikauskas, the founder of the Woodstock Times newspaper and a member of the board of the Catskill Center, moderated the lively two-and-a-half hour discussion.

Local outdoor guides, chamber of commerce members, hotel employees and a representative from the New York City Department of Environmental Protection all spoke about the importance of outdoor recreation in the region.

Above: Outdoor guide Kali Bird addresses the audience at the forum.

Kali Bird, the owner of a Beacon-based guiding business called Hike New York who is also the new associate director of the Catskill Center, kicked off the conversation by talking about the need for outdoor guides in the region.

"There is a huge need for young and old alike to connect with the natural world,” Bird said. “Urbanites are in need of ways and people to help them face basic logistic challenges and facilitate a positive experience.”

Registered by the New York State Department of Environmental Conservation, licensed guides are a one-on-one personal resource for outdoor enthusiasts looking to explore the Catskills. These guides must train to pass written tests, take water safety courses and also be certified in CPR and first aid.

Bird voiced a concern echoed by many in attendance: the need to improve transportation to and infrastructure within the Catskills.

"One of the biggest challenges is just getting here,” she said. “Once they get here, they need to know where to go, where to stay, where to eat."

There are websites like visitthecatskills.com that are instrumental in helping visitors plan trips, but since cell service is spotty at best in parts of the Catskill Region, there is still a need for the distribution of hard copy maps and print materials, according to Emerson Resort and Spa's Head of Guest Services Dan Sager.

"We have tons of trails,” he said. “We need to make it so people know they exist. Put paper in their hands."

Later on in the discussion, Carol O’Beirne, the executive director of the Central Catskills Chamber of Commerce, called for a "visitor’s center in every town."

The city's role in outdoor recreation

"From our perspective, recreation is very important," Stern said.

Over the last 20 years, the DEP has purchased over 130,000 acres of watershed land, Stern said, and over 13,000 people have boats on the reservoirs.

Stern said that most of the DEP’s land is open to the public without a need for permits for hiking, and that these ares are also open for fishing, hunting and trapping.

Access permits are only required on reservoirs, and the NYS Department of Conservation requires licenses for the sports of hunting and fishing. Stern highlighted the DEP’s 2013 implementation of free permits for certified guides to operate commercially on NYC water supply lands and reservoirs that are already open for public recreation.

Stern, the only speaker at the forum to mention hunting, highlighted the DEP’s partnership with the DEC in the Deer Management Assistance Program (DMAP), which helps local landowners manage the deer population.

"Connecting the users with the source is very important," said Stern.

At this point, Burr Hubbell of Hubbell Family Farm in Kelly Corners questioned Stern about DEP policy, asking why the city’s rules seem to be made in New York City despite the fact that these laws directly affect the economy of Catskill locals.

"Do you foresee a day when the Catskill residents will have a say?” Hubbell asked.

"The program we are operating in right now does involve local stakeholders," replied Stern.

Before the discussion could get heated, Sveikauskas redirected the conversation.

"This relationship is a work in progress," he said.

Above: Mark Loete, a fishing guide from Phoenicia, speaks at the forum.

“The Catskills are trending”

According to Sveikauskas, a 2012 study showed that recreational tourism on public land has attracted at least 1.7 million visitors to the Catskills, bringing more than $46 million to the region while supporting nearly 1,000 jobs. Those numbers more then double when including publicly accessible private lands like ski resorts, he said.

"The Catskills are trending," said Mark Loete, a fly fishing guide from Shandaken.

"This is a magical, life-affirming experience we are offering here. Some travel websites have named Phoenicia as the sixth-most-popular small town in America."

John Hoeko, the owner of a shop called Fur, Feathers and Steel in Fleischmanns, was excited to discuss disabled access to the East Branch of the Delaware River with Aaron Bennett, a consultant for the Water Discovery Center.

Bennett discussed the East Branch watershed, saying that the 371-square-mile region is more than 13 percent accessible to the public.

Together with the Central Catskills Chamber of Commerce and the Water Discovery Center, Bennett hopes to present ideas to towns around the East Branch, like Margaretville and Arkville, on how to make people aware of local water-related recreational opportunities on the river.

"We are living in a paradise,” said Sveikauskas. “The new economy is giving us ability to protect and evolve so we don't have to be poor forever.”

Above: John Hoeko, the owner of an outdoors shop in Fleischmanns, addresses the audience.

Don’t “wring the money out of the trees and streams”

Will Soter, the owner of Upstate Adventure Guides who leads a group called Catskill Adventure Tourism Summits, issued a warning about depending too heavily on outdoor recreation to revitalize the Catskills economy.

"We have to be careful to not exploit our resources and literally wring the money out of the trees and streams,” he said.

Soter reminded the audience that the Catskills house a forest preserve, not a park. There may not be as much signage and as many bathrooms along the trails, he said.

"We need to learn who our neighbors are, and learn how to plug into each other," Soter said.

Sveikauskas ended the discussion wiht hope that outdoor recreation will create a sustainable economic resource in the Catskills.

"For 350 years the mountains have divided us,” said Sveikauskas. “Now they are bringing us together.”

On Saturday, March 26, a third forum will explore the role the Internet and social media play regarding economic growth in the Catskills. In April, the final forum will be held, examining the role of the Maurice D. Hinchey Catskill Interpretive Center that opened in Mt. Tremper July, 2015. For more information, please contact Erik Johanson at 845-586-2611.