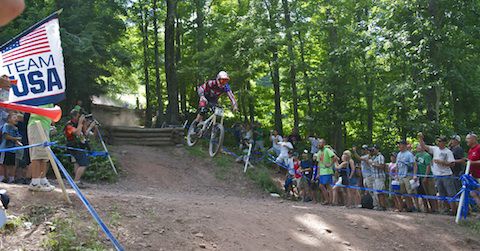 One World Cup mountain biking competition featuring 7,000 riders from 35 countries. Three days of yoga. Car and motorcycle shows, skateboard races. Summer concerts starring Buddy Guy, Gretchen Wilson and the brothers Allman and Avett. A chance to taste more than 300 beers made by 70 New York state brewers, zoom above the trees on a zipline or take your kids geocaching.

Welcome to the Catskills ski region, where resorts whose main attractions involve the fluffy white stuff have increasingly morphed into four-season recreation centers with wildly diverse offerings — both indoors and out.

“You have this huge asset — you can’t just shut your doors and wait for it to snow again,” says Troy Ketcham, the sales and marketing director at Windham Mountain in Greene County. “Every mountain is really a year-round mountain.”

Mother Nature smiled upon the winter sports season in 2013-14, with early cold temperatures and bountiful snowfall. Fans of downhill and cross-country skiing, snowboarding and snow tubing had little to complain about as the snowpack endured into early April.

It’s been a fabulous season for us on all fronts,” says Joe McCracken, the marketing manager at Ulster County’s Belleayre Mountain. But as the spring sunshine brought on the thaw, mountain managers were already turning their attention to the next round of events, ranging from private functions like weddings and family reunions to large-scale festivals showcasing beer, food and music. Hunter has been home to the TAP-New York craft beer festival for most of its 17 years, and the 2014 version included more breweries than ever. The two-day event celebrating beer made within the Empire State always takes place the last weekend in April.

Other large events at Hunter include the popular Mountain Jam and Taste of Country Music festivals, which draw thousands of fans for two consecutive weekends in early June. The latter debuted in 2013 as an outgrowth of Mountain Jam, and it’s growing quickly, according to Hunter marketing manager Becky Pine.

Music also takes over the weekend calendar at Belleayre throughout July and August, when the Belleayre Music Festival puts on about a dozen shows, from blues and country to world music. Down the hill from the slopes, Belleayre’s snowmaking pond transforms into a swimming beach during the summer months.

In August 2014, Windham’s hills will, for the fourth time, host the mountain biking competition UCI World Cup, the only World Cup level event held in the U.S., Ketcham says. The event, which involves downhill and cross-country racing, is expected to draw a total of 20,000 people from around the globe, including Olympic athletes. Mountain biking is a huge part of the warm-weather calendar at Plattekill Mountain, as well. The Delaware County resort hosts several competitions and also welcomes the general public. Summer camping is available at Plattekill for two-wheeling adventurers, as well as geocachers, hikers and nature lovers of all kinds.

The chairlifts that carry skiers and snowboarders to the top of each mountain also get a workout in the summer and fall, offering some of the Catskills’ most spectacular views to leaf peepers after the trees begin to turn. The more adventurous can take a ride in any season on Hunter’s four-mile-long network of ziplines, which range from leisurely tours through the forest canopy to the 50-mile-per-hour SkyRider, the longest and fastest zipline in North America.

“It’s a beautiful view any time,” Pine says. “And on a clear day, you can see five states from here.”

Amenities such as on-site restaurants and large gathering spaces with expansive mountain views set the stage for plenty of indoor events as well. The brand-new Ahimsa Yoga and Music Festival debuted at Windham in 2013 as a one-day event; in 2014, it expanded to a whole weekend in October. At Hunter, a new car show will soon debut, joining an existing motorcycle show and a Euro-car rally, Pine said.

The Catskills have also seen a surge in popularity as a wedding destination, with most of the resorts booking dozens of nuptials each year.

Having year-round tourism at all four resorts boosts the economy across the Catskills region. Revenue flows into restaurants and lodging establishments in surrounding towns, providing jobs and spurring related businesses, such as retail shops and professional services.

Visitors have a smorgasbord of activities on the mountain to choose from any time of the year, Pine said.

“What we have here is a different world. It’s easily accessible, and it’s affordable,” she said. “We have nature for nature lovers and music for music lovers — there’s really something for everyone.”