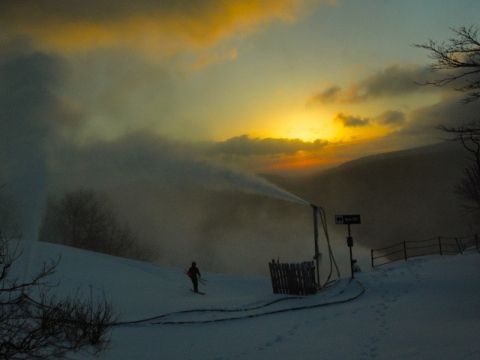 Above: The first day of 2014 snowmaking at Hunter Mountain. Photo by Athena Billias.

Hunter Mountain Ski Resort, which has been run by the Slutzky family since its founding in 1960, will be sold to a publicly-traded company called Peak Resorts for $36.8 million by Christmas.

The deal was announced on Monday, Nov. 30 in a press release issued by Peak Resorts.

“We’re going to try to close this by Christmas,” said Timothy Boyd, the president and CEO of Peak Resorts, in a conference call with company investors on Monday. “We think this is a huge plus for us going forward.”

The plan to sell Hunter Mountain was kept secret until Monday, when the resort’s employees were notified of the sale in a meeting, according to Katie O’Connor, Hunter Mountain’s spokesperson.

“This was a highly confidential transaction,” Boyd said in the conference call. “We couldn’t really talk to any of the employees.”

Tuesday morning, O’Connor said that Russ Coloton, Hunter Mountain’s president, was not available to speak to the press about the deal.

Gary Slutzky, one of the ski mountain’s owners, declined to comment, referring all questions to Coloton.

Based in Missouri, Peak Resorts specializes in buying and running ski resorts that are close to major cities, many of them formerly family-run, including Mount Snow in Vermont. The company owns 12 ski resorts in the Northeast and Midwest.

Above: Peak Resorts owns 12 ski areas across the United States. Graphic via peakresorts.com.

The company became publicly traded in November 2014, and in October 2015 it procured a $15-million line of credit to buy additional ski resorts.

Hunter Mountain is Peak Resorts' first purchase since the company went public, according to a timeline published by New England Ski History.

The company will pay $36.8 million in cash for Hunter Mountain, $20 million of which will be a mortgage secured by the mountain’s assets. The rest will be paid with the company’s newly-acquired credit line, according to the press release.

“We’re always built Peak Resorts on acquisitions,” Boyd said. “Hunter really falls into the purview of our wheelhouse at Peak Resorts. We consider Hunter to be a building block for us, because it really meets all the criteria that we’ve been talking about for the past year since we’ve been public.”

Hunter Mountain is arguably the most high-profile of the four Catskills ski resorts, and enjoys a large following in New Jersey and the New York Metropolitan region.

In 2015, the mountain invested heavily in new snowmaking equipment. The resort attracts between 270,000 and 300,000 winter visitors per season, according to Boyd.

Hunter’s competitors—nearby Windham Mountain, state-owned Belleayre Mountain and tiny Plattekill Mountain—each have their own fan bases, and Windham, which is owned by a group of investors, is the most similar to Hunter, heavily investing in snowmaking technology as well as terrain and mountain biking parks.

The purchase of Hunter Mountain leaves Plattekill Mountain as the last family-owned ski area in the Catskills, and signals that the local ski industry has left its small-time roots behind.

Beefing up budget; looking for savings

Peak Resorts plans to invest in Hunter Mountain, starting with beefing up the annual maintenance budget from $600,000 to $1 million per year, Boyd said in the conference call.

Boyd said that Hunter Mountain’s recent investments in snowmaking guns and other improvements, as well as the mountain's successful TAP NY, Mountain Jam and Taste of Country festivals, made the resort an attractive purchase.

"The Slutzkys have made a lot of investments in the ski area, and also made some operating changes,” he said. “They’ve just become more profitable and more efficient. We think we can still improve on that.”

Boyd said that the 2015-2016 ski season won’t be substantially affected by the sale, and that ticket prices will remain the same this season. The new owners will establish reciprocal season passes with Hunter Mountain and other ski mountains they own, including Mount Snow.

“This season, there won’t be any real significant changes at all,” he said. “Hunter will operate like it was going to. We’re taking over right at the cusp of the ski season, so it’s virtually impossible to make any changes.”

“It takes us about a year to really understand an operation, to see where the real savings are,” he said. “With a big operation like Hunter, it usually takes us about two years to figure them all out and get them implemented. It will probably be 12 to 24 months before we can start to realize and implement efficiencies.”

Whether Peak Resorts will consider layoffs is unclear. O’Connor said that she could not comment on whether staff reductions will be considered.

Hunter Mountain was founded by two brothers, Izzy and Orville Slutzky, in 1960, and has been run by the family ever since. The Slutzkys also ran a construction company that built schools and bridges in the Catskills, and the two businesses complemented each other, creating year-round seasonal work for the family.

Izzy died in 2006, and Orville died in 2013. Izzy’s sons C.B. and David and Orville’s children Gary, Paul and Carol, who together make up the second generation of the Slutzky family, now co-own the company.

Hunter Mountain has had many suitors over the years, but until now has not accepted a sale offer.

In the conference call, Boyd said that the decision to sell the mountain was a tough one for the Slutzky family.

“This deal was a tough deal, not because of anything with the Slutzkys, but [because] this is a family that has run this iconic operation for over 50 years. It was a tough decision for them to sell the property.”

Although Gary Slutzky says that Peak Resorts and Hunter Mountain staff are handling all communications while the deal goes through, the Daily Mail managed to talk to C.B. Slutzky, who said that his family plans to stay in the Greene County Catskills area:

“Life changes and things go on but we’re going to stay in the area and continue to be a major part of the community … None of us are getting any younger. I’m 70 years old, so when something good comes along you take it,” Slutzky said. “A whole new enterprise will be coming in, and it will be a positive situation for the business and the community."