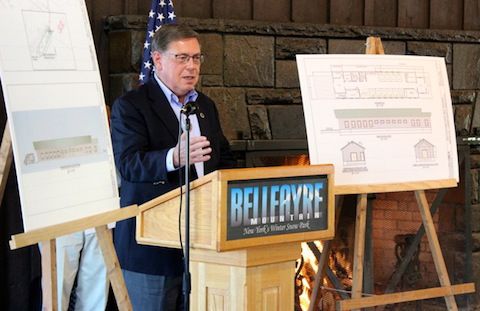 At a press conference held at the state-owned ski resort in the Ulster County hamlet of Highmount, Seward unveiled plans for the new facility before a group of local officials and interested residents gathered at the mountain’s Overlook Lodge.

Seward was joined by Ted Blazer, the president and CEO of the New York State Olympic Regional Development Authority (ORDA), which operates the ski mountain, and Joe Kelly, who serves as the second vice chair of ORDA’s board of directors.

In his remarks, Seward said that the ski center plays an important and evolving role in the economy of the Catskills.

“It is absolutely imperative that [emergency] services expand to meet the demands,” he said.

The new emergency facility will be built as an addition to an existing structure at Belleayre. The finished structure will be a 2,525-square-foot building built in a “linear configuration” that will include a trauma room, a 10-bed in-patient area and a first aid station. There will also be upgrades to the existing areas in the Discovery and Overlook Lodges that currently house medical services, according to a press release that accompanied the announcement.

In a nod to the role Belleayre Mountain Ski Center played in the aftermath of Hurricane Irene in 2011, Blazer said that if a natural disaster occurs, the new emergency center will be open to the wider Catskills community.

“The facility will also be available to assist should the region ever need medical services,” he said.

The ski center played a vital role in the aftermath of the 2011 floods, serving as a shelter and relief headquarters.

No official date for breaking ground on the new facility was announced.

Senator Seward, named by Kelly a “most ardent supporter“ of the ski center, called today’s announcement a “down payment” on the management plan for Belleayre.

Earlier this year, the New York State Department of Environmental Conservation approved the long-awaited Belleayre Resort project, which will build two resort hotels on the mountain near the state-run ski area.

In closing comments, the Senator said, “I feel very positive about the future of this region.”