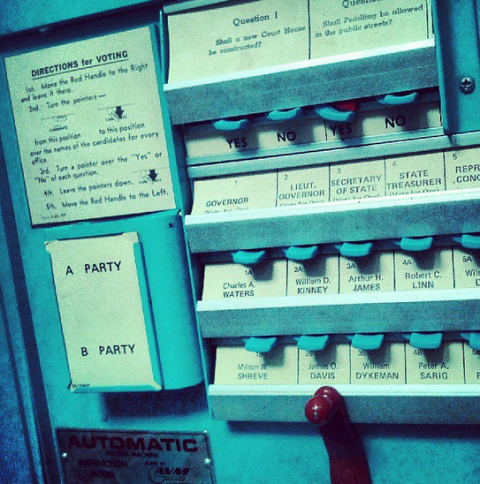 It's an election year, and today is the day to vote in the primaries.

The biggest race in the primary is on the Democratic ticket, where underdog candidate Zephyr Teachout is challenging New York State Governor Andrew Cuomo. Teachout is attacking Cuomo from the left by comparing his fiscal policies to those of Ronald Reagan.  Cuomo is doing his best to ignore Teachout's campaign entirely. (Literally. During a Labor Day parade in Manhattan, Cuomo managed to ignore Teachout as she stood directly in front of him.

As for local Catskills races, there are a few worth noting.

The Delaware County town of Franklin is holding a Republican primary for a town council seat. Bryan Babcock, the owner of Handsome Brook Farm and Bed & Breakfast who is also a professor at Hartwick College, is vying with Lisa Huyck and Donald Smith for one of two seats on the board. Babcock has criticized the town board for not implementing a comprehensive plan for Franklin.

"With several major infrastructure projects on the horizon in Delaware County," Babcock said in a press release. "it is essential that we protect our roads and utilities. To do this we need to be proactive as a Town Board. I feel that my experience as a business leader will help the Board be even more effective for Franklin residents."

In the Ulster county towns of Hardenburgh and Denning, the Sullivan County town of Neversink, and the Delaware County towns of Andes, Bovina, Davenport, Delhi, Hamden and Meredith, there is a Republican primary race for the 101st State Assembly District, which features a contest between Claudia Tenney and Chris Farber.  According to the Daily Star, the outcome of the primary doesn't matter -- both Tenny and Farber will make it to the ballot in November.

In Ulster County, three candidates are competing as Democrats, Independence Party, and Working Family Party candidates for a brand new Ulster County family court judgeship that pays $161,000 a year for a ten-year term, according to the Woodstock Times.