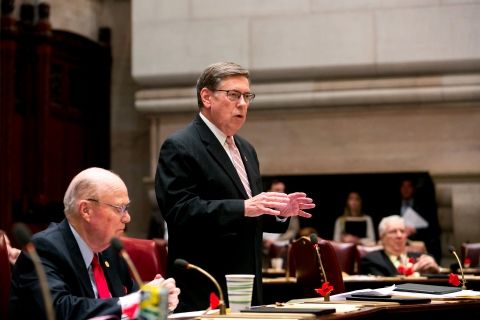 New York State Sen. James Seward announced on Monday, July 11, that he will be seeking his 16th term in office this November. The Republican state senator, who represents a portion of the Catskills, will face two Democrats who are gunning for his seat.

Seward hails from the Otsego County town of Milford, where he once served as town justice.

First elected in 1986, for 29 years Seward has represented New York’s expansive 51st Senate District, which contains portions of nine counties (including all of Cortland, Schoharie and Otsego counties) and is roughly the geographic size of Connecticut.

Seward submitted nearly 3,800 signatures on nominating petitions for his re-election, and will appear on the GOP, Conservative Party, Independence Party and Reform Party lines against his eventual challenger.

In a official statement announcing his candidacy issued last week, Seward said that he would focus on key issues for his constituents in his re-election bid.

"My focus is on the concerns I hear from people every day—property tax relief, economic development, aid for our neediest schools, resources for our local roads and bridges, and the crushing heroin epidemic," Seward said.

“It takes a combination of experience and vision to meet the challenges we face—my record of service coupled with my proposals for future growth fulfill those requirements,” Seward’s statement said.

On the other side of the aisle, two candidates have filed the necessary petitions to seek the Democratic nomination and challenge Seward in the fall race: Audrey Dunning, an attorney who lives in the Herkimer County town of Ilion, and Jermaine Bagnall-Graham, a U.S. Army veteran from the town of Sherburne in Chenango County.

Bagnall-Graham's campaign announced in a statement on Friday, July 15 that the political newcomer filed signatures for both the Democratic and Women's Equality Party lines in his self-declared bid to restore integrity to the 51st Senate District.

"Voters across the nine counties that encompass this district deserve a state senator who represents their interests, not Albany special interests, and I can’t wait to make that case directly to the voters throughout this campaign," said Bagnall-Graham.

Dunning and Bagnall-Graham will face off in a Democratic Primary on Tuesday, September 13.

The odds, however, are not in either Dunning nor Bagnall-Graham's favor, as the 51st Senate District has 68,000 registered Republicans to only 56,000 Democrat votes, and this is only the fourth time in the past 20 years that Seward is facing a challenge at the ballot box.