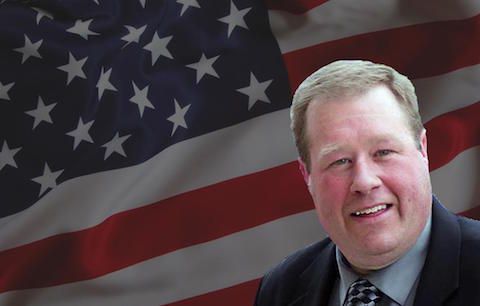 Above: Republican Chris Tague, shown above in a campaign image from his website, raised almost $20,000 in his successful bid to beat Schoharie County Town Supervisor Gene Milone on Nov. 3.

The political dynamics of Schoharie County were significantly altered when voters ousted a pair of Democratic town supervisors on Tuesday, Nov. 3, leaving the county GOP firmly in control of the county board by an almost five-to-one weighted vote margin.

In the upset of the evening, incumbent Middleburgh Supervisor Jim Buzon was defeated by political newcomer, Gerald "Pete" Coppolo, 359 to 326 despite Coppolo leading an under-the-radar campaign that began when he nominated himself for the Republican nomination in August.

Elected as supervisor in the aftermath of Tropical Storms Irene and Lee in 2011, Buzon has served as an influential player on the county board, from his advocacy for the controversial and costly stream bank project to his support for the recently-created position of county administrator.

Buzon, however, had faced substantial criticism for overseeing a fractious and ineffective Middleburgh town council, which led Middleburgh Village Mayor Matthew Avitabile to publicly endorse his opponent in a Facebook post claiming that many of the village's accomplishments have been “in spite of infighting within town government."

Impacting more than just the town, Coppolo's upset victory flips the Middleburgh’s 352 weighted votes on the county board of supervisors from the Democratic party to the Republicans. The newcomer's approach to governing remains a mystery, as the former county supervisor of maintenance is an unknown quantity politically.

Two years after running as the face of the anti-Conservative party during a period of pro-government reform fervor that took hold of county politics, two-term incumbent Schoharie Town Supervisor Gene Milone was ousted by Schoharie County GOP Vice-Chairman Chris Tague in an expensive three-way race yesterday.

Topping the polls with 50.1 percent of the vote, Tague is responsible for the most expensive campaign of the election season. According to the most recent data available from the state board of elections, the Republican bigwig raised just shy of $20,000 and spent more than $16,000 of that on his successful bid to defeat Milone.

Tague’s upset was made easier by Milone's support for building a new Public Safety Facility at the one-time Seebold Farm on Route 30 in the town of Schoharie. Vehemently opposed by nearby landowners, Milone's support for the approved location spurred resident Wanda Colyer to launch her own bid for supervisor, which received 7.3 percent of the vote.

Another major pick-up for the GOP, Schoharie's 326 weighted votes will be shifted away from the Democratic Party to the command of the county Republican's vice chairman, who is the heir-apparent to succeed longtime Chairman Lewis Wilson as head of the local party in the near future.

In one of the only bright spots for county Democrats, incumbent Blenheim Supervisor Shawn Smith lived to serve another day after surviving one of the strongest challenges of the election cycle by defeating former Secretary of State Gail Shaffer 77 to 60 in a surprisingly negative campaign.

A lifelong Democrat and one-time Albany power broker, Shaffer was supported by the town's Republicans and had doggedly attacked Smith, a country lawyer who serves as the municipal attorney for several towns and villages within the county, for allegedly having a conflict of interest in the issue of New York Power Authority re-licensing. The NYPA is one of Blenheim’s largest landowners.

“Negative campaigning doesn't work," Smith told the Watershed Post after his victory Tuesday night. "Gail spread tons of lies about me, but people are smarter than that,” he said.

Looking toward the future, Smith said, "I'm excited for another term to finish the work we started the last two years."

Although Smith has authored several successful resolutions opposing natural gas pipeline expansion and is viewed as a rising star in his party, he holds only 33 weighted votes on the county board, or 1.1 percent of the overall total.

Overall, after all was said and done, the Republican Party walked away with control of 12 of 16 supervisor seats on the county board. With those seats comes control of approximately 82.9 percent weighted votes. The Democrats, by contrast, have only four seats under their control for a paltry 17.1 percent of the weighted votes.

Furthermore, the combination of Republican upsets, opposed victories and unopposed wins will usher in five new GOP supervisors at the start of the new legislative term in January.

However, it remains to be seen how this new influx of Republican supervisors will fit into the county's evolving political dynamic, which is making room for new roots with the gradual step away from power by County Treasurer Bill Cherry, who was re-elected last night without opposition.

Newly-hired County Administrator Steve Wilson, whose post is a result of the efforts of reformers who were ousted last night, began his first day of work on Monday.

Correction: Due to an error in the unofficial election results posted on the Schoharie County Board of Elections website on election night, Duane Tillapaugh appeared to receive only 19 votes in the race for Seward Town Council. In fact, he received 190 votes out of 579 cast, second to the front-runner, Nancy Kniskern, and ahead of his two other opponents.