A dog's untimely death in the Catskills sends a message 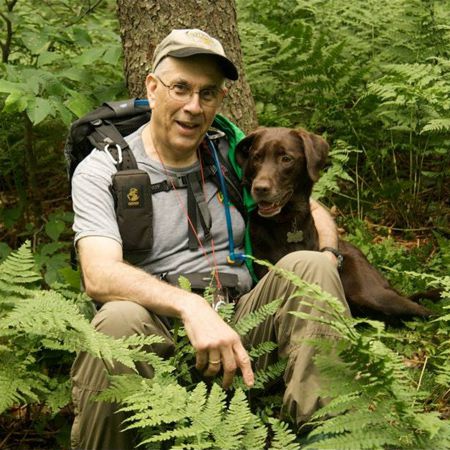 Above: Alan Via and Bookah on the trail. Photo by Joanne Hihn, who also took the photos used in the Times Union's story; reproduced by permission.

In her nine brief years on the planet, the four-legged Bookah racked up more hiking experience than most humans. With her owner, author and well-known local outdoorsman Alan Via, Bookah scaled all 35 of the Catskills' tallest peaks, earning the chocolate lab her own 3500 Club certificate.

But Bookah's mountaineering skills couldn't save her from a fate every dog owner dreads. While on a hike with Via in a remote and trailless area in the southwestern Catskills, Bookah ate a piece of meat that had been laced with the fast-acting poison strychnine, and died before Via could get her out of the woods.

Bookah died last October, but her story is now reaching far and wide, thanks to a recent story in the Times Union by columnist Chris Churchill. In the article, Churchill recounts how an ordinary hike turned tragic after Bookah ate something she found on the ground:

Via soon noticed a darkness in Bookah's eyes that was unusual.

"If you own a dog, you know when they're in distress," the retiree said. "I knew something was wrong."

The pair, near the summit, began descending the mountain. But Bookah slowed as sickness engulfed her. She trembled. Then her legs failed. She collapsed, limp and nearly lifeless.

Via carried the 50-pound dog for as long as he could, hauling her over rocks and fallen trees. Then he looped a leash through Bookah's orange harness and pulled the Lab through the woods and newly fallen leaves. Exhaustion overwhelmed him.

Reached by email, Via told the Watershed Post that many people have reached out to him since the Times Union article was published. He writes:

The response has been overwhelming. When I'm out with our new Lab puppy at the golf course and elsewhere, people who know me come up to offer condolences. I was walking Toby and got chatting with a group of dog walkers and one of them said "Are you that guy from the paper," and then they all started talking about it.

We've rec'd condolence cards from friends, and some people we don't know. One card remarked that I probably wouldn't remember her but she was on a hike with Bookah and I and some others a few years ago. She said she stayed with us as she was so amazed by Bookah.

An unsigned card came from a man whose wife has Alzheimer's. He said how sad he was after seeing all of the beautiful photos. They came to a slide presentation I gave at the Bethlehem library. He said he wasn't sure his wife would make it through the presentation but she did. But the highlight of the evening for them both was his wife meeting and petting Bookah and how much it meant.

The Facebook messages, posts and emails about her and what happened to her, from friends and people I barely know, have been overwhelming.

We love our new black Lab puppy, but Barbara and I miss Bookah so much. Losing a beloved dog to illness or old age is bad enough, even when you have time to say a last goodbye. Unfortunately Boo's last few hours were filled with pain and terror. The memory of those hours and my not being able to do anything about it will haunt me for a long time.

In a recent blog post, the New York-New Jersey Trail Conference condemned the practice of leaving out poisoned bait, believed to be the work of someone seeking to poison coyotes in the area:

Via shares this story as a caution to dog owners and to those who use poisoned bait in the woods for any reason.

To the latter: poisoned bait is not only illegal, but is a reckless and inhumane endangerment of all creatures. Please stop and use your better sense.

Bookah's death was tragic, but by spreading the word about the dangers of strychnine poisoning, Via may save other dogs in the Catskills from a similar fate.