Cycling the Catskills: From steep trails to smooth sails 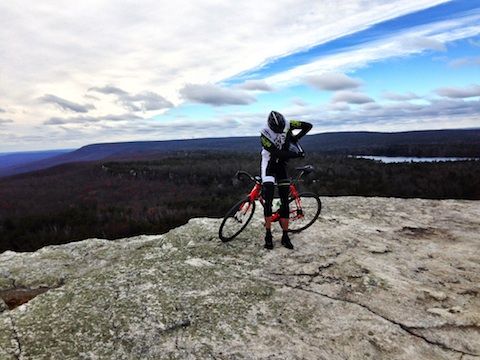 Climb up and over the rocky Shawangunk Ridge to a spectacular vista overlooking the Hudson Valley. Meander along hundreds of miles of carriage lanes and trails through the Mohonk Preserve. Ride through rolling pastureland on 19th- century dirt roads, lined by mossy stone walls and shaded by tunnels of overarching trees. Travel winding country roads for hours without seeing more cars than you can count on your fingers.

The Catskill Mountains were made for cycling. And if you’re not here already, they’re easier to get to than you might think. From New York City, in less than two hours by car, you can leave urban sprawl far behind and discover a cycling utopia. You don’t even need a car to get here: Bring your bike on a scenic 90-minute Metro-North train up the majestic Hudson River to Poughkeepsie, cycle across the Walkway Over the Hudson, and you’re practically in the Catskills.

The eastern and southern Catskill Mountains, most accessible to visitors from the greater New York metropolitan area, are home to the Shawangunk Ridge, the Ashokan Reservoir and the Catskill Park, comprising more than a million breathtakingly scenic acres. Be prepared for a lot of climbing, glorious descents, spectacular cliffs and tumbling waterfalls.

From the south, the gateway to this area is the bustling college town of New Paltz, where many a city cyclist has enjoyed a steaming cup of coffee against the background of the Gunks, one of the premier rock climbing destinations in the world. Bike up and over the Gunks — or around the ridge to the north, if you prefer — and you enter the rugged foothills of the southern Catskills, an area that invites exploration along fast-flowing rocky creeks and quiet gravel roads. Beyond the foothills are the mountains themselves, true alpine terrain, with many miles of challenging climbs and long mountain passes where you can ride for literally hours without seeing any sign of civilization beyond the edge of the pavement.

For those seeking easier routes, a growing network of rail trails in southeastern Ulster County offers gentle slopes to cyclists and hikers alike. At the eastern end of the Catskill Park, the mountains form a crescent around the vast Ashokan Reservoir, whose southern edge boasts miles of well-maintained cycling trails with majestic views of the reservoir.

Continuing north, the mountains resume. The eastern escarpment of the Catskills, visible from as far away as Vermont, is passable in only two places, both steep and challenging. The easier route is the winding climb up to Kaaterskill Falls, a breathtaking 260-foot cascade just a few minutes’ walk from the road. The other passage is the imposing Platte Clove, known to cyclists as the Devil’s Kitchen, a climb of world-class difficulty. Pace yourself, or be prepared to get off and walk.

Don’t let the hills scare you. The Catskill Mountains have lots of ups and downs, but you don’t have to be a hardcore roadie to experience the Catskills by bike. The mountains can accommodate cyclists of all abilities. To the west, the high peaks of the Catskill Park give way to the tempered hills and rolling farmlands of Delaware County, where a long history of dairy farming shows in the landscape. Here, century-old dirt roads connect streamside villages, climbing through the rural hills and pastureland that lie between the more populated valleys. On summer weekends, many of the villages host farmers markets, which are great for taking a break between the hills.

Families with kids can experience the joy of cycling on the Catskill Scenic Trail, a flat 26-mile packed gravel rail trail that runs through bucolic farmland between Bloomville and Roxbury. No special bikes are needed to explore the gravel roads and trails here — most bikes will do fine. Take a spin along Delaware County Route 18, a gently rolling road following the West Branch of the Delaware River between Stam-ford and Delhi. Or for a longer, yet very easy ride, take in the 50-mile loop around the stunning Pepacton Reservoir.

Whether you’re an endurance cyclist looking for a long-distance challenge, a hill junkie who can’t get enough vertical torture, a gravel grinder looking for off-pavement fun, or a casual cyclist just wanting to take in unspoiled beauty and rustic charm, there’s a route waiting for you in the Catskills.

John Ferguson, John Schwartz and Anton Tutter, who collaborated on this article, are the authors of the Riding the Catskills blog (ridingthecatskills.com). Check out their website for ride reports from all around the Catskills, in all its various flavors of terrain. You’ll find photo-laden, curated routes of different lengths and difficulties that avoid major roads and explore hidden back road gems, with links to turn-by-turn cue sheets and maps.