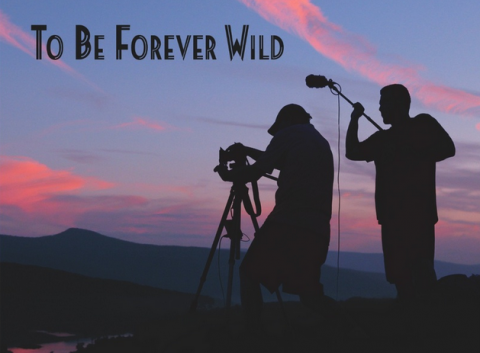 David Becker released "To Be Forever Wild," a documentary film about the Catskills, in the summer of 2014. The project has been four years in the making—we interviewed Becker back in 2012 about his plans for the film, which was shot and edited collaboratively with the help of a large crew of volunteers. This fall, Jenna Scherer, our arts correspondent, got to watch the finished product. Here's her review. - Ed.

The Catskill Mountains are hundreds of millions of years old, formed by eons of sedimentary accumulation, continental collision, glacial erosion and deforestation. But for every new generation that claps eyes on the region, it’s something brand new.

That sense of novelty and aw-shucks wonder is the engine that fuels "To Be Forever Wild," filmmaker David Becker’s new documentary about the Catskills and the way they make people feel.

The film covers 12 days in the lives of Becker his crew, a group of young artists, filmmakers and musicians—mostly from New York City—as they head north to do the mountain thing. Along the way, they rub elbows with knowledgeable locals versed in everything from geology to fly-fishing—and, of course, Sullivan County homeowner and movie star Mark Ruffalo.

As a director, Becker goes out of his way to capture a sense of motion and life, taking the camera on cliff jumps off the edge of waterfalls, on zip-line rides through the tree canopy, and careening down scenic sunlit highways.

The in-between moments in this movie are about the crew finding creative inspiration in their surroundings: folky jam sessions around a campfire, sketches at Artist Rock in Greene County, and antique-camera photos of swimmin’ holes.

This can all feel a little precious at times, but fortunately, that’s not the meat and potatoes of the film. That would be Becker’s motley mix of interview subjects, who all get jazzed about the Catskills in different ways.

Among them are natural historian Michael Kudish, who leads the film crew into the woods as he cores a bog; Ellen Kalish of the Ravensbeard Wildlife Center in Saugerties, who rehabilitates injured owls and hawks; and Lama Karma, a monk from Woodstock’s Karma Triyana Dharmachakra Monastery, who emigrated to the region from Tibet. The diversity of perspectives gives you an appreciation of just how many different ways there are to look at a place like this.

Becker's muse is 19th-century naturalist John Burroughs, the Catskills’ own famous essayist and conservationist. But "Forever Wild’s" spirit is closer to that of a group of little kids who appear early in the film, waxing rhapsodic about sticks.

“One of the things I like about the Catskills is, in my opinion, they have the best sticks out of every other place,” says one.

“Oh yeah. The sticks at the Catskill Mountains are awesome!” his friend adds, waving one around.

Below: Young mountain climber Arlo Cusmano in a still from the film "To Be Forever Wild."

Though the film has a tendency to gaze too deeply into its own navel, the overall feel of this documentary is one of exuberance and generosity—and that’s worth enduring the sillier bits for.

"To Be Forever Wild," a film by David Becker. Watch a preview, find screenings, and buy a copy at tobeforeverwild.com. The Catskill Center for Conservation and Development at 43355 Route 28 in Arkville will be screening the film on Thursday, Nov. 20 at 6 p.m. Director David Becker will be onhand for a Q&A afterwards. More info at catskillcenter.org.

Sneak peek at a feature documentary about the Catskills: "To Be Forever Wild"