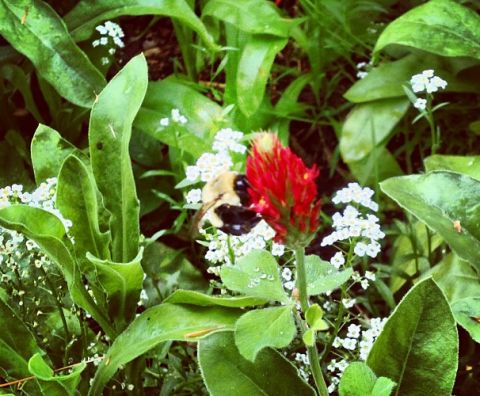 A Catskills bumblebee forages on clover. Photo posted on Instagram this morning by Sean Mahoney.

Happy Thursday, Catskills. The hour has come at last: There's a chance of patchy frost in tonight's forecast, with temperatures expected to dip down into the 30s across the region. Cover your tomatoes, folks.

There's a distinct chill in the air at the Times Herald-Record, whose corporate parent, the Dow Jones Local Media Group, was recently sold to Fortress Investment Group, a private hedge fund. Those wondering how the handover could be worse for the paper than being owned by Rupert Murdoch's News Corporation are advised to check out Boston Business Journal reporter Jon Chesto's sobering take on the sale:

Cuts will likely be coming to the largely insulated Local Media Group papers. In an investor presentation, Newcastle says $10 million in cost reductions have already been identified at the group. The papers are described as “under-managed by News Corp.” with “expense reductions of only 6% since 2010.” Translation: We can take more out of the expenses than News Corp. did.

News outlets across the region -- and the nation -- have felt the squeeze of layoffs and shrinking revenues in recent years. We can only hope those "expenses" soon to be managed out of existence don't include too many Times Herald-Record newsroom jobs.

New York State yogurtmaker Chobani is feeling some heat lately, after a batch of moldy yogurt from a plant in Idaho forced the company to pull about five percent of its product off store shelves. The company's attempt to quietly pull their stock, rather than issuing a public recall, has drawn the attention of the FDA, and Chobani's Facebook page is flooded with customer complaints about "puffy" yogurt cups full of "runny," "fizzy" spoiled yogurt.

Cow tipping is a myth, reports Modern Farmer's Jake Swearingen, who backs up the claim with peer-reviewed cow-tipping science and a helpful diagram.

A 27-year-old Coxsackie man, Joshua Flach, was arrested yesterday and charged with the theft of over $300,000 worth of heavy equipment: two excavators, two commercial snow pushers, a front-end loader, and a Mack dump truck, all of which recovered from a Coxsackie property on Route 9 rented by Flach. Bonus: You can't tell from the cropped photo in the Daily Mail, but in his mugshot from the New York State Police, Flach is wearing a "Flach Excavation" T-shirt.

State police have also made several arrests in connection with a string of burglaries of parked cars around Narrowsburg.

Still at large: The vandals who knocked over almost 100 gravestones in the Highland Cemetery on Tuesday night, breaking some stones and causing over $30,000 in damage.

Exonerated: The former head of a Kingston home for the developmentally disabled, charged with stealing money from residents, who was found not guilty by a jury on Wednesday.

Ulster County's growing rail trail network got a little bigger this week, with the official opening of the Williams Lake Rail Trail connecting Kingston with the Rosendale trestle bridge.

On the topic of local rail trails: The Catskill Mountain Railroad is furious at the county for removing about 500 feet of county-owned rail track near Lasher Road in Big Indian to make emergency repairs. The railroad and the county are currently locked in legal battle over the future of the old Ulster & Delaware rail corridor, which Ulster County executive Mike Hein wants to convert to a walking trail from Kingston to Highmount.

Ulster County legislator Robert Aiello wants to sue the state Department of Environmental Conservation for letting New York City release turbid water into the Lower Esopus, reports Freeman reporter William Kemble -- who may want to check his math. (If there are currently a billion gallons a day spilling into the Lower Esopus, the Watershed Post's editor will eat her hat.)

Officials play Whac-A-Mole with parking problems near swimming holes: A multi-agency effort to crack down on illegal parking in Kaaterskill Clove has shifted the problem to more far-flung swimming spots in Palenville, local residents say.

Quote of the day goes to Delaware County's beleaguered undersheriff, Craig DuMond, who visited a recent county Board of Supervisors meeting to report on a huge uptick in drug-related crime in the region:

"It’s amazing that we can round up and indict 12 felony level drug dealers from one particular community in the morning and that afternoon buy drugs in that same community."

Brooklyn blogger Wayne Ferrebee recently visited the Mohonk Mountain House in New Paltz to attend a wedding, and was glad that, unlike many other hotels of its particular Victorian vintage, it has not burned down:

We should probably feel that the big burned-up spots where the other hotels used to be are haunted and celebrate the lovely Mohonk as the safest and least disaster-prone resort of its era.

NewsShed is the Watershed Post's snappy little weekday digest of news, weather and hot bloggy goodness from around the Catskills. Got a hot tip or a photo for the NewsShed? Send it to [email protected].