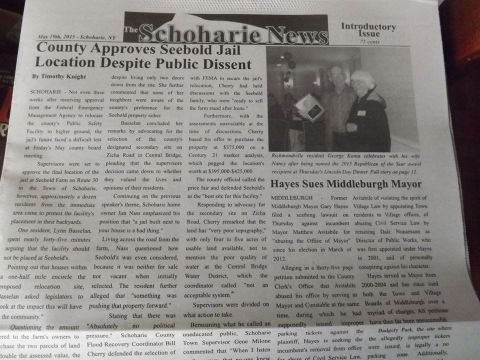 The Schoharie News, an online-only news website that reinvented itself as a print weekly broadsheet earlier this year, has thrown in the towel after 13 weeks.

The paper's owner, editor and founder Tim Knight, said that he decided to close the paper after he realizing that he was making less than half of what he made while working at a local deli.

Knight posted a closing editor's note about the newspaper's demise on Tuesday, Aug. 25:

After thirteen weeks of publishing a weekly newspaper that I reported in, got ads for, designed, edited, managed, and then on every Tuesday afternoon when everything else was completed, I delivered 90% of the product countywide, the paper and I reached our inevitable end.

The paper's finances were in rough shape and my sanity was teetering on the verge of being totally lost, due to overworking and lack of reward.

A labor of love does not come remotely close to describing how soul crushing it was to invest so much time (40-50 hours per week) for so little payoff (often less than $200 per paycheck), because that's all the business could afford.

As everyone could probably guess, I love writing with a passion, but I do not enjoy working for $4 per hour running my own business when I made over $11 per hour cutting hot capicola before.

So, in retrospect, was it worth the trouble? The answer is: absolutely yes.

"I gave it my best," Knight said in an email yesterday.

The passing of the paper leaves Schoharie County with a single dedicated print weekly, the Times Journal.

But oddly, it's the Schoharie Onion, an online satirical newspaper written by an anonymous editor, that may miss Knight's venture the most. As media outlets struggle in the county, the Onion has been producing some of its own investigative reporting alongside its acid-tongued editorials. The onion eulogized the passing of the Schoharie News earlier this month:

Starting out as an online news source in the summer of 2013 The Schoharie News has steadily grown in popularity and influence. Its young editor and owner, Timothy Knight, has eloquently pined for a better government, provided traditional news stories, and shared numerous observations on wide ranging topics ... Unfortunately but not surprising, it has not worked out and this week will be the last print edition for the Schoharie News. Of course, we have jabbed and disagreed with the Schoharie News’ opinion on several occasions, but we have always supported their right to express it. Mr. Knight lends valuable insight and fills a needed void in our media culture. Our county needs more reporting not less.