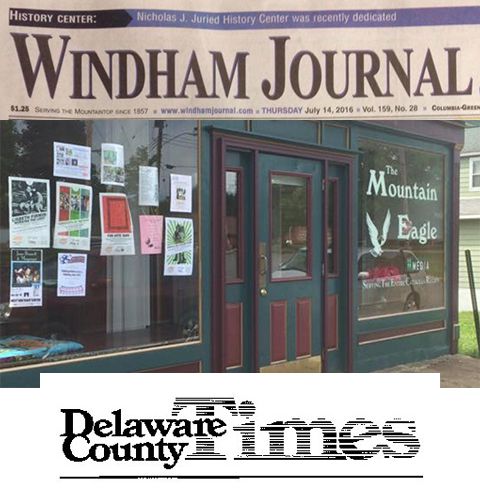 Weekly newspapers in the Catskills region have had a bad month. One local weekly quit publishing entirely, while two more that are part of a regional chain laid off veteran reporters.

The Delaware County Times, a newspaper that traces its lineage back to 1839 in Delhi, published its last issue on Friday, July 8.

The paper employed three people in its Delhi office on a part-time basis and relied on a cadre of freelance journalists, including the author of this article, to cover local news. Contributors were notified on July 8 that the paper would cease publication.

Donald Bishop, the publisher of the paper, did not return a request for comment. Cathy Roloson, who coordinated the news gathering and layout of the paper, said that a companion publication, the semiannual Kaatskill Life magazine, will continue to be published online and that she will continue to work in the Delhi office. She also indicated that the Delaware County Times may resume publishing in the future.

Both weeklies are owned by the Columbia-Greene Media group, a chain based in Hudson that is owned by an even large chain, the Watertown-based Johnson Newspaper Corp.

Vinciguerra said that falling profits were partly to blame for the cuts.

“For a long time, these newspapers were making profits at margins much greater than they are now,” he said.

But Johnson Newspaper Corp. is also pulling back from weekly newspapers to invest in regional daily newspapers, including the Daily Mail in Catskill and the Register-Star in Hudson, he said.

“We’ve increased the staff, slightly, of our dailies,” Vinciguerra said. “We really feel that in our region, the daily newspapers are where we should be investing.”

He added that the reporters who were laid off from the weekly Catskills papers had an opportunity to apply for jobs at company's daily newspapers.

Michael Ryan was a 30-year employee of the Windham Journal who lost his job this month. He said that he received a letter from Vinciguerra summoning him to the company headquarters to inform him that his job had been cut.

“They called me over to Hudson and sent me a letter,” he said.

Ryan said that the decision was not a big surprise, as a company official had visited Windham last fall and mentioned the possibility of cuts.

With Ryan, the paper's sole staff writer, gone, he said, the only person in the Journal's newsroom is the paper's editor, Sara Tully. Ryan said that the paper had some columnists, but, “they're gone, too.”

Ryan blames the times, not the company, for the situation.

“The millennials wouldn't know a newspaper if they tripped over one,” he said of the tendency of young people to get their news from other sources.

Ryan said that company officials “were pretty honest” about the financial situation that led to the layoffs.

“It was not a reflection on anybody's work,” he said.

Still, Ryan said that he is saddened by the weakening of community papers.

“I'm amazed as how much these little papers mean to the people in the towns that are lucky enough to have one,” he said.

Other weekly papers in the Columbia-Greene chain are the Chatham Courier, the Ravena News-Herald, the Greene County News and the River Chronicle in Red Hook. Vinciguerra said that the Ravena and Chatham newspapers were also affected by the cuts, although neither paper lost any staff.

Correction: The Windham Journal is based in the Greene County town of Catskill, not the town of Windham.