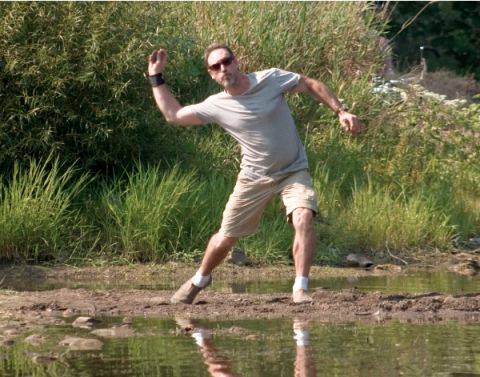 Paul Fero winds up for a throw at the 2012 Rock In River Festival in Franklin, PA on August 24. Photo by Michael Henderson; reproduced by permission.

How many times can you skip a rock?

Chances are, not as many times as Paul Fero.

Fero, an Oliverea resident, competed in this year’s “Rock In River Festival” in Franklin, PA on August 24th, where he attempted to dethrone the mighty Kurt “Mountain Main” Steiner and see how far he could skip his rocks against some of the toughest competition in the country.

The festival, which hugged the banks of the Allegheny River, featured not only some of the best rock-skippers in the county, but also rock decorating, games, crafts, free food and even a petting zoo.

Fero placed third in the competition after a tie-breaking decision. Fero's highest total of the afternoon was 40 skips, a feat he shared with competitior Eric Henne. To break the tie, the judges of the competition use each competitor's second highest number of skips, which placed Fero just four skips from second place.

The Watershed Post talked to Fero about his experience at the festival.

Paul Fero: This is my third year competing in Franklin, PA. This year was packed with contestants from Chicago; Virginia, Boston, Canada and other far away places. There were three women in the 'pro' division, 39 contestants in total. Being a round robin event, it was nearly a half hour between shots -- very tough to keep a rhythm, and it was hot sitting out there in the sun.

WP: How did you become so good at skipping rocks? Was there a lot of training involved?

PF: I have always enjoyed skipping rocks but didn't get good until this year. I did train a lot this year, tried to build up my shoulder strength, and it being a light winter I was able to almost throw year-round.

WP: What is the most amount of times you've personally skipped a rock? Do you remember where you were when you did that?

PF: My most memorable throw this year was a day before the contest. I always get there a day before and practice on-site. Anyway, I threw one rock that just kept going, at least 10 more skips then my 40 at the contest, but there was nobody there to see it.

WP: Let’s talk about Kurt "Mountain Man" Steiner. He seems to win the competition a lot. How do you think he can be dethroned?

PF: Kurt Steiner is one of my favorite subjects, he is the best pure skipper I have ever seen, and has also helped me personally to become better at our sport. He is very intelligent and analytical, and will always be hard to beat because he always hits his shot which is not easy in competition, throwing as hard as you can. Last year we talked a bit warming up, he seemed to like my shot, but not my rocks. After the event [which he won], he gave me two of his rocks as examples to better my rock selection. Russ' Rock Bottom' Byars beat him three years ago, eclipsing Kurt’s 40 with 42 on his last shot. They are tied with six wins each at this event and have I think a healthy rivalry. Also, there are many young guns getting better every year. So Kurt is going to have to be at his best to win next year.

WP: Are the rocks standardized at these competitions? How exactly do they do that?

PF: No. You can throw any size or weight but the rocks have to be thrown as found; no filing or sanding, oiling or any other nonsense is allowed, the officials do check your rocks.

WP: What are your plans for the future? Will you enter the competition again? If so, what is your goal?

PF: The 'Rock In The River Festival' at Franklin PA is by far my favorite day of the year, I cannot believe that a person can be as happy as I am on that day. So yeah, I will [barring a catastrophe] be there trying to beat the field. My other goal is to set up a New York contest. It is hard to find a spot with good water, footing to throw from, places to park etc.

WP: Thanks, Paul. Any last words?

PF: Everyone get out there and skip some rocks, it is good clean fun.

Middleburgh ice rink is back in business

Powder on the mountain