Middleburgh ice rink is back in business 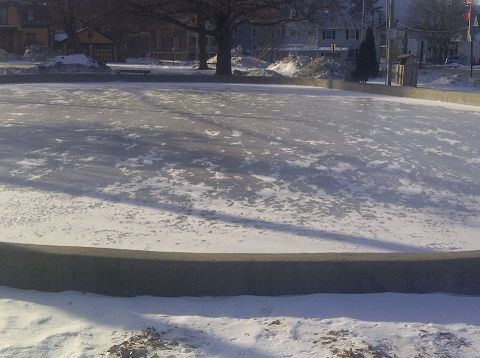 It's been ten years since anyone cut a figure eight on the ice rink in Middleburgh's Badgley Park. Built in the 90s by the village Rotary Club, the rink has been defunct for years, put out of commission after the rubber seals at the bottom that hold the water in place while the rink is freezing began to leak.

Today, the rink is open again -- thanks to the ingenuity of village trustee Bill Morton, who came up with an inexpensive way to fill the rink without fixing the seals. Morton was also behind a village-wide wildflower planting project that began last year.

"What they were doing before was just dumping four inches of water and letting it freeze. It would leak out," said Middleburgh mayor Matthew Avitabile. "Bill said, 'let's do this gradually, let's put a couple of layers on it.'"

It wasn't rocket science, but it worked. Thanks to the combined efforts of the village Department of Public Works (who cleaned out the rink), the Middleburgh Fire Department (who laid down the ice, one layer at a time), and a timely assist from the polar vortex, the rink was filled and frozen for the first time in a decade by Tuesday morning.

"It would be difficult to fill it if it wasn't below 15 degrees," said Avitabile.

The mayor is hoping that now that the rink is fully frozen, it will last through the warmer weather expected for this weekend.

With temperatures currently around 5 degrees in the village, it's a little raw out for skating today. But Avitabile is delighted to have the rink up and running again.

"I'm thrilled," he said. "This is something I've been asked a lot about, and it's been getting to me."

Spinning skaters at the ice carnival