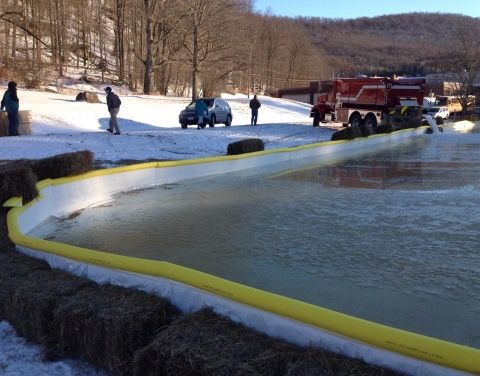 Rockefeller Center, eat your heart out. On Saturday, Feb. 8, the Delaware County town of Delhi will celebrate the opening of a new public ice rink.

The ice rink is on Sheldon Drive, near Delaware Academy, and skaters can park at the school. The grand opening will be at 11 a.m., with free refreshments and skates available to borrow, according to an announcement on the town's website. Skating at the ice rink will be free of charge.

The rink is a collaboration between the town and the village of Delhi, said village mayor Richard Maxey. Both the town and the village have chipped in for the portable ink, which according to Maxey cost about $5,000. The Delhi Fire Department helped out by filling the rink, and the school is doing its part by providing parking and benches for skaters to sit on.

The opening was originally scheduled for a week earlier, but got delayed because of the weather, Maxey said. Subzero temperatures meant that the rink had to be filled with loads of water pumped from the West Branch instead of from village hydrants, because of the risk of a water main break, and the so rink could not be filled with a continuous, even stream.

Maxey said the rink would be a much-needed attraction in an area where people could use a few more things to do.

In January, the village of Middleburgh reopened its free outdoor ice rink after a decade of disuse, after a village trustee came up with a method for filling the leaky rink without expensive repairs. Another once-popular local rink, in the village of Margaretville, has been out of commission for several winters.

Spinning skaters at the ice carnival