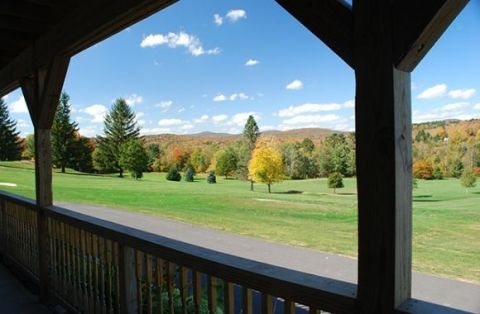 Local ski resort Windham Mountain announced this week that the resort's owners intend to buy the Windham Country Club, an 18-hole mountaintop golf course near the mountain, and annex the golf course to the existing resort.

Like much of the surrounding town, the golf course at the Windham Country Club was badly damaged by the Irene floods in August of 2011. In a column written shortly after the flood, golf writer John Craig of the Troy Record described the damage in vivid terms:

On Wednesday, I found myself in Prattsville in Greene County. On Aug. 8, I had been down that way at Windham Country Club for a great day, covering a NEWGA event and then playing golf. I didn't think that 16 days later, I would see a backhoe in the middle of the 10th hole, a stream that turned into a raging river snaking through the front nine, and a water hazard that ducks and geese were in on the 12th hole. It wasn't there before. It was jaw-dropping.

They also lost two bridges and a maintenance barn with all their equipment. I can only imagine what water may have done to the most unique pro shop in the region. Windham head pro Brian Lowe says they lost four holes and won't be fully back to 18 for up to two years.

In a story about the impending sale, the Daily Mail's Michael Ryan reports that the shareholders of the Windham Country Club have begun an effort to restore the course to its former glory, but the $6-10 million price tag is too daunting for them to complete the repairs on their own. Ryan writes:

Herculean efforts have been put forth, in-house and with help from outside sources, to return the 85-year-old course to its former self, achieving amazing results but not removing deep scars...

...Lagging membership, a falloff in day trip or weekend casual golfers and a general decline in the popularity of the sport all combined to put the business in a fiscally tenuous position.

“We didn’t have the money to do what needed to be done,” said a person familiar with the process leading to the board of directors reportedly approaching the Windham Mountain partnership.

In a press release issued Tuesday, Randy McDonald of Windham Mountain Partners said that the acquisition will clear the way for the repairs to be completed:

“While details of the acquisition remain to be finalized, we are optimistic that they will be completed quickly and we anticipate being ready for opening day,” said Randy MacDonald, managing partner of Windham Mountain Partners.

Current employees of the golf course will be kept on by the new management, the press release stated.

The Daily Mail reports that although a dollar figure for the purchase has not been announced, the price is expected to be between $1 and $2 million.

Below: A video of flood damage to the Windham Country Club that was uploaded to YouTube on August 29, 2011, the day after the Irene floods.