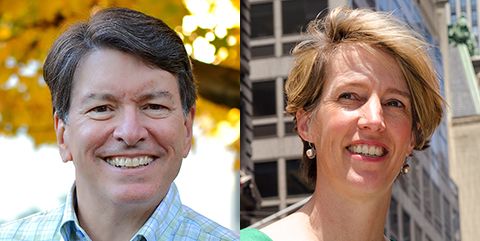 Above: Republican John Faso will face Democrat Zephyr Teachout in the general election for the 19th Congressional District, which covers the entire Catskills region of New York.

With over 80 percent of districts reporting by 11 p.m., anti-corruption activist and 2014 gubernatorial candidate Zephyr Teachout prevailed in the Democratic primary over Livingston Town Councilman and farmer Will Yandik by a 76-24 percent margin.

On the Republican side, former New York State Assembly Minority Leader John Faso defeated primary foe Andrew Heaney by a 65-34 percent margin following months of blistering attack ads and negative campaigning between the two that continued even as ballots were being cast.

The Columbia County Board of Elections briefly became the center of attention earlier on Tuesday when the county's Republican primary ballots improperly included the name of former candidate Bob Bishop, who dropped out of the congressional race in early May.

Bishop's inclusion on the ballot caused problems with early votes, because voting machines had been programmed to only recognize two available names—Bishop and Heaney—which caused votes for Faso to come up blank, Politico writer Jimmy Vielkind reported.

Although the correct ballots were distributed to local precincts by 4 p.m. on Tuesday and the early ballots are scheduled to be hand-counted, Heaney's campaign cried foul over the faulty ballots and sought an impound order for ballots in Columbia County.

”It's a disgrace that with only one race on the entire ballot, the Columbia County Board of Elections has so grossly failed the voters,” Heaney said in an emailed statement to the press. Heaney's campaign staff also called on the New York State Board of Elections to investigate the matter, which they alleged was either due to incompetence or fraud.

Faso's campaign staff maintained level heads throughout the ruckus, stating in an email to the press that the affected ballots would be tabulated by the Columbia County Board of Elections after polls closed.

Tuesday’s results set the stage for Faso and Teachout to spend the next four months battling for a majority of votes in New York's 19th Congressional District.

Although both candidates have suffered defeats in New York gubernatorial races (Faso in 2006 and Teachout in 2014), they have vastly different takes on myriad issues.

The biggest difference between the two may be their approach to campaign finance reform. While Faso has benefited from $890,0000 in super-PAC-funded TV ads targeting his primary opponent, Teachout has gone on the record calling for elections to be publicly financed and for Citizens United, the landmark campaign finance Supreme Court case, to be overturned.

To read more about each candidate and to stay abreast on the ongoing 19th Congressional District race, please see the Watershed Post's series of profiles of the candidates and our latest coverage.