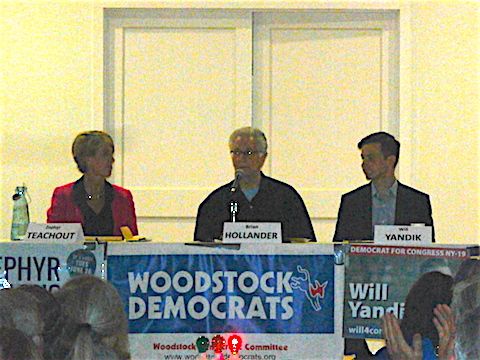 Above: Zephyr Teachout, left, debates Will Yandik, right, in a discussion moderated by Brian Hollander, center, in Woodstock on Tuesday. Photo by Timothy Knight.

Over 100 Democrats squeezed into the Mescal Hornbeck Community Center in Woodstock on Tuesday, June 7, where they listened to the first of three scheduled debates between primary contenders Zephyr Teachout and Will Yandik, who are competing for the Democratic nomination in New York's 19th Congressional District race to replace the retiring Republican Congressman Chris Gibson.

Sponsored by the Woodstock and Kingston Democratic Committees, the debate was moderated by Woodstock Times editor Brian Hollander and lasted slightly less then two hours.

Teachout and Yandik Both hail from rural progressive communities. The two candidates didn't debate each other so much as they offered slightly different visions of paths towards the same goals. The primary differences between the two on Tuesday night were of style, not substance.

Although both candidates had their own campaign bases that offered loud and boisterous applause, the room of Democratic party faithful often cheered for both candidates with near unanimity.

While Yandik stated in his opening remarks that he was running to “return power back to the hands of the citizens," Teachout countered in her opening statement that she is "running to raise up the voices of those who have been shut out."

The two candidates echoed each other on topics ranging from corruption and the economy to foreign policy and gun control.

For example, while both Teachout and Yandik supported background checks for all gun purchases and closing the so-called "gun show loophole," Teachout stated that she was opposed to the unpopular gun control SAFE Act because of the way it was enacted, while Yandik joked he was probably the only person at Princeton who received a shotgun as a graduation present.

Furthermore, while neither candidate offered specifics, both signaled their support for increasing the federal minimum wage, although not to $15 per hour.

Yandik believed that New York's recently adopted regional approach to raising the state minimum wage was appropriate, while Teachout retorted, "I don't think you can approach this regionally, because your local Wal-Mart can pay $15 per hour.

Touching on the subject of corruption, Teachout told the crowd, "I have spent my adult life fighting against Citizens United," mentioning that she had been quoted by four Supreme Court justices in their dissents in the landmark campaign finance case.

Both candidates agreed that there is too much money in politics. Yandik said that redistricting reform is another major aspect of the political system that needs to be addressed, because only 35 of 435 House of Representatives seats are rated as competitive across the entire nation.

The spirit of agreement was a stark contrast to the political bloodbath that is happening on the other side of party lines in the Republican primary battle, where John Faso and Andrew Heaney have launched increasingly negative attacks on each other.

Drawing boos from the crowd, Teachout described GOP front-runner John Faso, her likely opponent, as someone who "comes from that Albany corruption.” She is ready to fight him in November, she promised the crowd.

One of the more interesting moments in the debate occurred when Teachout called attention to a campaign tracker who was attending the event. Identifying him only as "Joe" from America Rising, a PAC that produces opposition research on Democrats, the candidate said that he had been following her across the district at different events.

Few in the audience paid any mind to the tracker, but a member of Teachout's campaign staff repeatedly taunted the man by standing in front of his video camera and taking close-up photographs of him.

A new joint poll released by Time Warner News and Siena College shows Teachout with an impressive 30-point lead over Yandik. While Yandik draws the support of just 23 percent of the district's Democrats, Teachout is comfortably over the 50 percent mark with fewer than three weeks to go until the June 28 primary.

Teachout and Yandik squared off again on Wednesday, June 8 at the Foothills Performing Arts Center in Oneonta, and will debate a third time on June 15 in a televised debate on Time Warner Cable.