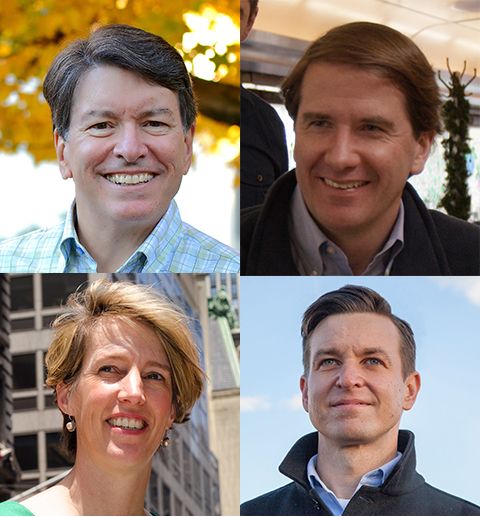 Above: Republican John Faso squares off against Republican Andrew Heaney and Democrat Zephyr Teachout goes head to head with Democrat Will Yandik in a primary election today, Tuesday, June 28.

Following months of contentious and hard campaigning, voters will be heading out today, Tuesday, June 28, from noon to 9 p.m. across New York's 19th Congressional District to nominate both the Democrat and Republican Party challengers to replace the retiring GOP Congressman Chris Gibson.

To read more about each candidate and where they stand on the issues, please see the Watershed Post's series of profiles of the candidates in the 19th Congressional District race.

For Faso, this campaign has become a referendum on his career as a political insider, where decades of inside-the-capitol wrangling have come to define his persona at every turn.

However, despite months of negative attacks by Heaney's campaign on Faso's record, Faso was leading his opponent by 30 points on the eve of the primary, according to a new Time Warner Cable/Siena College survey of Republican voters in the 19th District.

Things have not gone as smoothly for the Heaney campaign.

A heating oil businessman who is a first-time candidate for public office, Heaney has sought to distinguish himself by attacking Faso for his lobbying ties while emphasizing his own small business credentials.

Heaney has also gone out of his way to associate himself with presumed GOP presidential nominee Donald Trump, who won 60 percent of Republican votes cast in the 19th District in April's presidential primary.

Further damaging Heaney has been $890,000 in funding heading to pro-Faso super-PAC-funded negative TV ads. By comparison, the pro-Heaney NY Jobs Council has spent only $71,125 in ads opposing Faso in the run-up to today's primary, according to the Poughkeepsie Journal.

The Democratic race for the nomination has been the polar opposite of the GOP's intraparty squabbling.

Failed 2014 gubernatorial candidate and anti-corruption activist Zephyr Teachout and Livingston Town Councilman and farmer Will Yandik have run two collegial, non-controversial candidacies in their respective bids for the Democratic nod.

While Yandik has centered his campaign around his homegrown ties to the district, Teachout has become a folk hero of the progressive cause.

Fueled by the name recognition she built while challenging Gov. Andrew Cuomo in 2014 and an early endorsement she received from U.S. Senator Bernie Sanders, Teachout's profile has received national praise and support from the Congressional Progressive Caucus, Democracy for America and the New York Times.

Although both Teachout and Yandik are viewed positively by the 19th District's Democratic constituency, according to the Time Warner Cable/Siena College survey released on Monday, Teachout holds a commanding 39-point lead over Yandik.

Although he grew up in the 19th District and has received support of from local Democrat leaders, Yandik has struggled to build up a base here. Forty percent of Democratic voters in the 19th District haven’t heard of his candidacy, according to the Time Warner/Siena poll.

Polls will be open from noon to 9 p.m. across the 19th Congressional District today for registered Republicans and Democrats. The district includes Delaware, Greene, Schoharie, Sullivan and Ulster counties, all in the Catskills, as well as multiple counties in the Hudson Valley. To find your polling place, go to the website of your county’s Board of Elections website, below:

Delaware County Board of Elections - http://www.co.delaware.ny.us/departments/elec/elec.htm

Greene County Board of Elections - http://greenegovernment.com/departments/board-of-elections

Schoharie County Board of Elections - http://www.schohariecounty-ny.gov/CountyWebSite/BoardOfElections/boe.html

Sullivan County Board of Elections - http://www.co.sullivan.ny.us/Departments/DepartmentsAM/ElectionsBoardof/...

Ulster County Board of Elections - http://ulstercountyny.gov/elections/