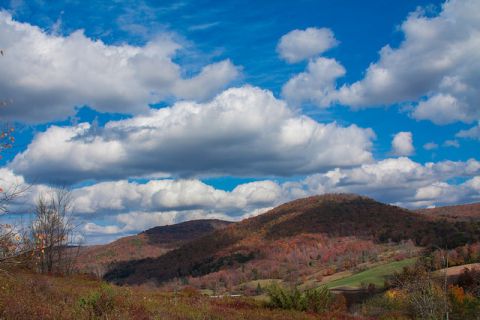 Above: Barnes Hill on a sunny fall day in 2014. Photo by Dennis Schevjda, via Flickr.

If the national travel press has anything to do with it, the Catskills will be flooded with tourists in 2015.

Two separate publications, Fodor's and Travel + Leisure, have put the region on their lists of the best places in the world (the world!) to visit next year.

Fodor's Go List 2015 lumps "The Hudson Valley and the Catskills" together, and lists them as #2, right after "The Arctic" and before Namibia and Guatemala:

Forget New York City—the allure of the Hudson Valley and nearby Catskills Mountains are now impossible to ignore. Just a few hours north of the city, quaint towns like Hudson, Rhinebeck, and Tarrytown have officially morphed into hip enclaves, with charming boutique stores, a blooming art scene (don’t miss Storm King and DIA: Beacon), and farm-to-table restaurants that give Brooklyn a run for its money thanks to the Culinary Institute of America. Outdoor enthusiasts flock to the Catskills for its skiing and hiking options while history buffs enjoy the Franklin D. Roosevelt National Historic Site and United States Military Academy at West Point.

Travel + Leisure gives the Catskills top billing on its list of "Best Places to Travel in 2015," and describes the region as a Mecca for "a new tribe: hip, design-crazed travelers:"

A string of stylish B&Bs have opened, many of them by transplants from Manhattan and Brooklyn (call them “hicksters”) who value buzzwords like local, authentic, and handmade.

(The now-defunct Green Door Magazine, which coined the term "hickster," should be proud.)

And other media outlets are noticing the Catskills. Earlier this month, the Wall Street Journal gave the annual Ice Harvest Festival at the Hanford Mills Museum a shout-out in a roundup of winter activities. This fall, Condé Nast Traveler swooned over the Catskills in an article called "The Catskills are New York's New Culinary Retreat."