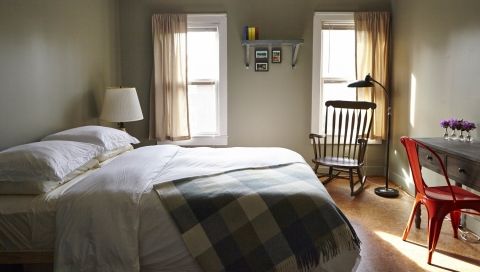 For over a century, urbanites have found refuge in the Catskills. But the heyday of the grand Victorian mountain hotels is over, and the era of Borscht Belt resort kitsch is passing away. These days, our downstate neighbors are looking for something a bit more off the beaten path in their country getaways.

A new breed of hotel is cropping up in the hills: small, laid-back escapes that cater to a design-conscious clientele. Emboldened by the success of the Graham & Co., a former Phoenicia roadhouse that re-opened as a chic motel last year, several new hotels have seized on the concept of the Catskills as a hipster's alternative to the Hamptons -- a drum New York Magazine has been beating for nearly a decade.

This summer, visitors to the Catskills will have their pick of half a dozen new boutique hotels opening in time for the 2014 season, each offering its own unique twist on the concept of a country weekend.

With their new hotel The Arnold House, Kirsten and Sims Foster want their guests to feel like they're spending the weekend with some close friends in their country house — except their friends happen to have a personal chef and own a bustling tavern.

That's why the Fosters put "House" in the name.

The Fosters have generation-spanning roots in Livingston Manor. The've started three restaurants in the Sullivan County hamlet, the most recent of which was the Lazy Beagle, which earned a passionate local following before it burned down in a fire in 2012.

After the fire, the Fosters didn't flee: They decided to stay in the food and drink business, buying Lanza's Country Inn on Shandelee Mountain to transform it into the Arnold House.

While planning their own wedding last September, Kirsten said they found it difficult to find places for their family and friends to stay. It’s hard to find a place within driving distance of the city, let alone something for under $400 a night, she said. The couple decided to take their own experience and the town’s need for a new tavern into account when designing the Arnold House.

“We really hope to convey a strong sense of place and of area,” Foster said. “We want to honor the rich history of this area while also adding our own touch for today's day and age.”

All the furnishings selected for the building riff on the Catskills' rooming house, resort and fly fishing history with vintage fixtures and antique furniture. The nine rooms were also designed with modern guests in mind.

“We tried to keep them as uncluttered, calming and comfortable as possible with the aim of providing a weekend retreat from otherwise busy lives,” Foster said.

“Ultimately, we want this to be a haven of sorts for guests in search of some downtime.”

Part of the appeal of getting out of town and heading up to the mountains is getting the chance to hear the birds instead sirens and see the stars instead of streetlights, said Casey Scieszka, who owns the Spruceton Inn in West Kill.

Scieszka said she and her husband, author and illustrator Steven Weinberg, had been talking about taking on a hotel rehabilitation project for a while. It wasn’t until they relocated from Morocco and back to Brooklyn that she had her lightbulb moment, and decided to create an unplugged weekend escape in the wilds of Greene County.

Scieszka said the vision for the hotel, officially opening in July, is understated. The large windowed rooms and “purposefully muted” designs are meant to keep guests' attention on the natural backdrop.

The Spuceton occupies an old farmhouse and motel nestled in a valley surrounded by state-protected forests. The building was formerly known as the Schwarzenegger Sunshine Valley House, which Scieszka says was once owned by Arnold Schwarzenegger’s cousin Karl. The attached bar from those days, aptly named "Conan’s Corner," will keep its name.

Instead of a "bed and breakfast," Scieszka and Weinberg are calling their place a “bed and bar," to avoid hoary old B&B cliches.

The phrase "bed and breakfast conjures up images of “doilies and lace and nosy innkeepers,” Scieszka said. “But that’s not what we envisioned.”

The couple is serious about the "bar" part. They have plans to partner with a nearby brewery, West Kill Brewing, that Scieszka says her neighbors are starting, and are open to other local partnerships as well.

“We’ve been trying to reach out to different local businesses,” Scieszka said. “At home, you go to your fancy New York grocery store to buy your milk from the Hudson Valley and upstate. Up here, our guests really want the same thing.”

Above: The sign at the Hotel Dylan. Photo by Lissa Harris.

You just can't miss an oversized peace sign. That's how you find the Hotel Dylan, on Route 28 in Woodstock.

When Shokan native Paul Covello heard rumors that the old Maverick Hotel building across from his brother’s gym on Route 28 was going to be bought by a dollar store chain, he found himself upset with the thought of driving by the site every weekend. Covello and his wife had been considering attempting a larger-scale renovation project in the region where they spent most weekends, so when they heard the news, they decided to “just go for it.”

The goal was to create a hotel that jibed with the historic vibe of Woodstock. Teaming up with husband-and-wife design team Cortney and Robert Novogratz, Covello had a vision for a hotel that was eclectic and creative, with Elliot Landy's iconic Woodstock photographs lining the walls of each room and a Volkswagen bus serving as a shuttle service between the hotel and downtown Woodstock.

“From our marketing intelligence, we view the Catskills as the alternative to the Hamptons for a more eclectic hipster crowd,” Covello said. “Route 28 is the gateway to all things Catskills. We’re the perfect place to stay.”

The biggest challenge, Covello said, has been finding a restaurateur willing to take on the intimidating adjoining restaurant space — all 7,100 square feet of it — attached to the hotel. Covello said the ideal business would be a local farm-to-table operation that could manage the space as a gastropub or brewery on the ground floor and a catering space or live music venue venue.

“The upstairs event stage would be perfect for music, intimate unplugged gigs,” Covello said. “It’s a real opportunity to bring back what Woodstock is known for, what it might be lacking these days.”

Soft opening May 24, 2014, with a future grand opening to be announced soon.

Above: An interior at the Nash Hotel. Photo courtesy of Jim Grinchis.

Sharon Springs, the home of the Nash Hotel, was once a booming Jewish resort town. By the 1980s, it had become a ghost town.

Grinchis and Phenix opened the Nash in May. During the first two days they were open for business, the hotel's website received over three dozen inquiries from prospective guests for the three available rooms, which the couple plan to expand to four. According to Grinchis, the Nash's large suite is already booked for the entire summer by tourists drawn to local music festivals and quaint and historic Sharon Springs itself.

“We’re seeing a younger and diverse audience from the Boston and New York areas,” Grinchis said.

Grinchis comes from a design background, which is reflected in the Nash's modem design aesthetic that "fuses modern style with country hospitality," according to the Nash's website.

It's not your classic farmhouse bed and breakfast. Instead, the Nash features modern amenities, a collection of paintings and sculptures from local artists and a bar that plays “everything from Sinatra to the Sex Pistols.”

"It's not country," Grinchis said. “What we’re offering is something more than the typical experience in the country. We’re modern, comfortable. More functional and visual and not fussy.”

Above: Spillian from below. Photo by Kelly Merchant of Green Door Magazine.

Opening an "epicurean camp for grownups" has been a dream for Leigh Melander and Mark Somerfield for years. The couple migrated from California to the Catskills to launch Spillian: A Place to Revel, in an historic mansion in the village of Fleischmanns last October.

Spillian offers workshops, lectures and retreats that combine philosophy, mythology, and life coaching in a playful mix of programming that aims to "give people tools to imagine past what is impossible." Coming up this summer is a five-day workshop on "Your Hero's Journey" taught by the president of the Joseph Campbell Foundation, and a two-day "Fools' Gathering" on "the Study of Myth."

To house Spillian, Melander and Somerfield bought the last remaining "summer cottage" built by the Fleischmann yeast dynasty in the 1880s. Perched on a mountainside high above the village of Fleischmanns, the building is a historic wonder: an intact Stick style mansion with a stately wrap-around porch, 47 windows, and delicate oil murals painted throughout the pine-panelled interior.

"It's remarkably intact," said Melander, adding that the mansion is in the process of being registered as a historic structure. "It was an incredibly modern house for that time."

The rooms play on whimsically historic themes. Guests can stay in the the Jules Verne Room, a steampunk chamber with a telescope and a brass bed; the Lotus Room, with a contemplative pan-Asian vibe; or the Scheherazade Room, the highlight of which is a papier-mâché camel.

Out back, trails criss-cross the "Spillian Heartwood," the forested mountainside that was once the private playground for the wealthy Fleischmann family. Spillian is partnering with the New York-New Jersey Trail Conference to develop the trail network and make it available to the public.

A chef lives on the property to cater to the needs of hungry retreat attendees, and the mansion is open every Sunday for "Soup Sundays," a community dinner.

Julia Reischel contributed to the reporting of this story. Spillian is a Watershed Post advertiser.