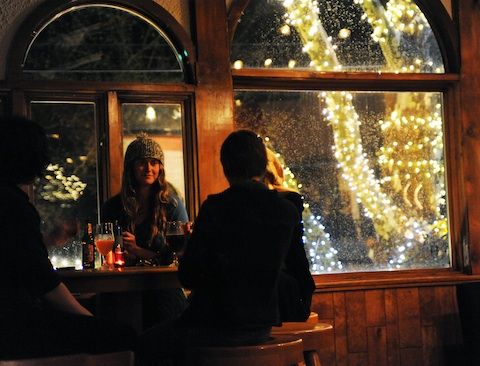 Above: The Java Lounge, an upstairs café at Joshua's, overlooks Tinker Street in Woodsock. Photo courtsey of Joshua's.

It’s an exciting time for the Catskills restaurant scene. In the past few years, the area has launched many new restaurants. (For a smattering, see our related story in the Catskills Food Guide.)

But the flip side is that restaurants tend to come and go, especially in the far-flung rural corners of the region. Nothing puts the kibosh on an evening out as surely as showing up at that cute little bistro you’ve heard so much about only to find that it’s closed, or has changed its hours, or the owners decided to take off for Palm Beach until spring.

Here, then, are a few well-loved mainstays of the local dining scene. If you’re in search of reliable hours, battle-tested entrees and service that runs like a well-oiled machine, look no further.

Woodstock is home to more than a few beloved places that have stood the test of time. The most iconic is probably Joshua’s (51 Tinker St., 845-679- 5533, joshuascafé.com), a Tinker Street mainstay with a huge, eclectic menu that ranges from traditional middle Eastern fare to hearty brunch to artfully prepared vegan and vegetarian dishes. Upstairs from the dining room is a bright, airy, Wi-Fi-equipped café; great for a latte and a snack with laptop in tow.

Another longtime Woodstock favorite is the Gypsy Wolf Cantina (261 Tinker St., 845-679-9563, thegypsywolfcantina.com), a popular mexican restaurant that’s big on portions and bigger on atmosphere. Kids will love the chili pepper lights, wolf masks and giant lizards on the ceiling; grownups will appreciate the tasty frozen margaritas.

Phoenicia’s main drag is studded with well-loved restaurants, most of them owned by local food mogul Mike Ricciardella, who’s behind both the upscale Ricciardella's (54 Main St., 845-688- 7800, ricciardellas.com) and the more laid-back Sportman's Alamo Cantina (70 Main St., 845-688-5259, alamocantina.com). We like the Cantina’s sister restaurant, Brio’s (68 Main St., 845-688-5370, brios.net) for its brick-oven pizza, its varied and reasonably-priced menu, and the excellent people-watching on the patio.

Driving through Boiceville along Route 28, you may be tempted to skip the unassuming-looking Boiceville Inn (Route 28 at DaSilva Road, 845-657-8500). Inside, however, is a warm, cozy den with a friendly bar and good pub food.

While you’re in Boiceville, stop in at The Landmark Grille (4072 Route 28, 845-657-2240, landmarkgrille.com) for some hearty American comfort food. Wednesdays are barbecue nights, with house-smoked ribs, brisket and pulled pork; Thursdays are wing night, with 60-cent wings and a variety of sauces. Catch lively local music most Saturday nights, with no cover.

It began as an antique shop, and you can still buy antiques at Tannersville’s Last Chance Antiques & Cheese Café (6009 Main St., 518-589-6424, lastchanceonline.com) along with cheese, chocolate and other gourmet fare. But if it’s a good meal you’re after—perhaps with one of 300 beers to wash it down with—Last Chance will not disappoint. The place is justly famous for its fondue, and serves up hearty fare to hungry skiers coming off Hunter Mountain.

Fondue is apparently a thing in Greene County; another local favorite in nearby Windham is the Chalet Fondue (55 Route 296, 518-734-4650, chaletfondue.com), featuring German and Swiss food in a charmingly old-fashioned setting.

The artsy little Delaware County town of Andes is notorious for short-lived restaurants. And then there’s the Andes Hotel (110 Main St., 845-676-3980, andeshotel.com). Open seven days a week, year-round, it’s beloved among die-hard locals and city folk alike, offering solid steak-house and pub fare and a stellar beer list. On summer Fridays, the Summer Shack out back comes alive for “Cans and Clams” with live music and $3 cans of beer.

Down the road in Margaretville, the Binnekill Square Restaurant (746 Main St., 845-586-4884, binnekillsquarerestaurant.com) serves up classic Swiss and French dishes, and is one of the few places in the Catskills to get luscious, garlicky escargot. Chef and owner Walter Keller, a Swiss native, has presided over the kitchen since 1981. Thursdays and Sundays, the restaurant features a special schnitzel menu.

Old world authenticity is on the menu at A Taste of Europe (3630 Route 145, Cobleskill, 518-296-8000, atasteofeuropeny.com). Chef Jeanette Balins serves up traditional dishes that can be tough to find in these parts: French coq au vin, handmade Polish pierogi, and turnover-like Latvian pīrāgi with bacon and cardamom.

“Eat Here Or We’ll Both Starve,” Roscoe’s Rockland House (159 Rockland Road, 607-498-4240, rocklandhouse.com) declares, somewhat alarmingly. Rest assured, you won’t go hungry; the venerable Sullivan County spot specializes in huge steaks and hearty seafood entrees. The Rockland is an inn as well as a restaurant, catering to anglers who come from far and wide to fish the famous Beaverkill and Willowemoc rivers.

This article originally appeared in the print version of the 2014 Catskills Food Guide, our annual publication covering local farms, restaurants and food purveyors. Find a copy near you here. Find a farm, market, restaurant or other food-related business in our searchable, sortable online database here.