Return of the polar vortex 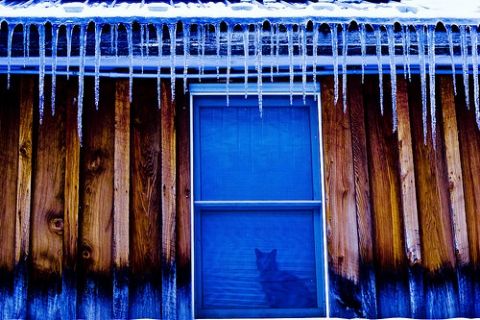 Don't go out there, kitty. Photo taken in Andes over the weekend by Mark Zilberman; shared in the Watershed Post's Flickr group pool.

It's baaa-aaaaack: The polar vortex, a whirling mass of low-pressure frigid air that usually has the decency to stay far north of us, is dipping down south again this week to pay the Northeast and Midwest another visit.

Here in the Catskills, temperatures have been dropping fast, and are still headed lower. A recent weather briefing from the National Weather Service in Binghamton calls for temperatures in the single digits today, dropping down to between 0 and -14 overnight. The extreme cold is expected to last several days, with temperatures warming up to a comparatively balmy 5 to 20 degrees on Thursday.

Wind chills tonight will be a fierce -15 to -30, cold enough to cause frostbite in under an hour. A wind chill advisory is in effect for Sullivan County, and Delaware, Greene, Schoharie and Ulster have more serious wind chill warnings in effect from 6 p.m. tonight through noon on Wednesday.

One thing the Catskills won't be seeing much of: Snow. While the lower Hudson Valley is looking at up to 10 inches of snow tonight, dry air over the Catskills will keep snowfall to a mere 2 inches or less, according to a detailed storm forecast from Hudson Valley Weather.

During the last bout of subzero temperatures, large power outages to NYSEG and Central Hudson customers left thousands of homes in Delaware and Ulster County without power for anywhere from several hours to overnight. Stress on the power grid was high statewide during the last cold snap, leading the New York Independent System Operator to ask consumers for temporary voluntary cutbacks in their power usage. During extremely cold weather, the demand for electricity goes up while the weather takes a toll on the physical infrastructure of the power grid, making power outages more likely.

If you have a backup generator, make sure you run it safely, and don't operate gas generators indoors. In 2012, an elderly Shokan couple died in a generator mishap during a power outage, when the generator filled the home with carbon monoxide.