This weekend: Labor Day in the Catskills 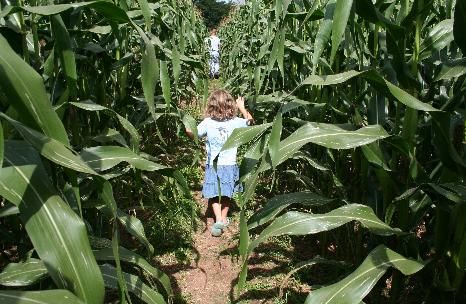 Child of the corn: A young Catskillian ventures into a corn maze at the annual Bovina Farm Day, returning to Crescent Valley this Sunday.

Still deciding how to spend Labor Day Weekend? The Catskills has it all, from farm days to fire jugglers. Below: Our four-county guide to the last hurrah of the Catskills summer.

BONUS TREAT FOR ALL: The Catskill Center has organized giant fireflies for our amusement -- well, sorta. They’re actually fire tower lights. On Saturday night, August 31, at 9pm, the long-dark fire towers come to life for half an hour in a tribute to the "Watchers of the Mountains." Look toward Overlook Mountain in Woodstock, Mount Tremper, Hunter Mountain, Mount Utsayantha in Stamford, Balsam Lake Mountain in Hardenburgh, Red Hill in Claryville, or Mohonk Mountain in New Paltz to enjoy the display.

Come down to the hamlet of Roxbury for the second annual Busk and Bard Roxbury Street Performer Festival, when the hamlet will be overtaken by ranters, chanters, unicyclists, fire artists, mages and more, much more, including ample refreshments. It’s happening on Saturday August 31 from 12pm to 5pm.

Gleaming heavy metal will rule in Deposit as the Classic Car Show and Cruise fills Fireman’s Field with every sort of vehicular whimsy. “As long as it has wheels and a motor, you can bring it” is the rallying cry -- tractors, bikes, cars, and trucks of all sorts are welcome, and you can ogle the antique military collection of John O’Connor. The fun runs from 9am to 3pm on Saturday, August 31. There’s a $5 entry fee for exhibitors.

When was the last time you played hay field checkers? Bring the family to the fifth annual Bovina Farm Day on Sunday, September 1 from 10am to 5pm. There’ll be a mouthwatering farmer’s market in progress, kids’ games, hayrides, a corn maze to get lost in, and a cooking demo from Burnett Farms, among other things. Admission is $5 a carload. You’ll find the good times at Crescent Valley, a.k.a. 634 Weber Road in Bovina Center.

What better tribute to Labor Day and to summer than a mega reggae blast? Join Mark Shine and Rocsta Society and a bunch of their friends (including DJ Spinosa, Platinum Sound, the Big Takeover, and more) in Bloomville for a Summer Party, an afternoon of righteous jammin’ to reggae, ska, steel drum, calypso & dub, Sunday, September 1, from noon to 8pm. Caribbean jerk cuisine will be served. Admission is $5. It’s happening at Dairy Field by the Turquoise Barn, 8052 County Road 18.

Bring a picnic into Margaretville on Monday, September 2, enjoy a concert of Civil War era music by the renowned 77th Regimental Balladeers, and grab your last chance to view the "Middletown in the Civil War" exhibit. The grounds at 778 Cemetery Road open at 11am and the concert’s at 1pm. Admission is $5 for adults; kids 12 and under get in free.

Now that they’ve cleaned up the Mudfest mud, come out to Prattsville and learn more about the gutsiest little town around. Saturday, August 31 is Colonel George Watson Pratt Heritage Day, by George, and at the Zaddock Pratt Museum on Route 23 they’ll be honoring the Founder from 11am to 5pm with music: the Roxbury Brass Ensemble, Jerry Silverman, and "Abraham Lincoln in Song" featuring the 77th NY Regimental Balladeers. There will also be a Union Encampment and military drills on the Prattsville Village Green by the 120th New York Volunteers.

And while you’re in Prattsville, take time to stop in at the up-and-coming avant-garde Prattsville Art Center and get a look at the Art of Mudfest. The exhibit’s open from 1pm to 5 pm on both Saturday and Sunday.

In East Durham, it’s time for the annual Labor Day Celtic Festival hosted by the Blackthorne Resort. Let the kids go wild in the bounce-house or snuggle with goats at the petting zoo while you indulge in corned beef and cabbage to the sounds of Kitty Kelly, Jameson’s Revenge, Erin Og, Black 47 and more. They’re doing a haunted house, hay rides, antique taxis, taste tests and all kinds of stuff, starting at 9am on Saturday and Sunday, August 31 and September 1. Admission is $15.

If Labor Day puts you in a reflective mood, the Catskill Arts Society has just the ticket. “Ghosts of the Catskills: Reflections on the Rise, Ruin and Rebirth of the Catskills” will be opening on Saturday, August 31 at the Society’s digs on Main Street in Livingston Manor. Curated by Elizabeth Ennis and Andrea Brown of the Outsider’s Studio Collective, the show features paintings, installations, video pieces, short films, sculpture, and mixed-media two-dimensional work by internationally known artists with Catskills connections. The opening reception, which features a talk by Times-Herald Record Sullivan County editor (and onetime Catskills waiter) Barry Lewis, runs from 3pm to 6pm on Saturday, August 31.

Also on Saturday, art mavens can attend the opening of “Quantum States of Light” featuring Sullivan County-based artists Nicholas Clemente and Joan Nicole at the Stray Cat Gallery in Bethel from 4pm to 7pm.

There’s a gathering at the River Market in Barryville on Saturday, August 31 from 7-9, at which the good folks from Green Door Magazine will reveal the identity of their fall cover-person. They’re having some fun with this; on the magazine’s Facebook page you can try to guess who it is, and the first two winners will receive Joan Osborne tickets for next week at Bethel. Third correct guess gets a year’s subscription to Green Door.

On Sunday, Livingston Manor is the place to be for the annual Labor Day Parade and community shindig, The parade’s at noon, down Main Street; the theme is “Reading, Rolling, and Rhythm,” and community groups of all sorts, including the Manor’s own MountainTones Marching Band, will be strutting their best. Renaissance Park will be rock-n-rollin from 11am to 4pm with kids’ activities, vendors, food, music, and demonstrations. Admission is free.

It’s the kickoff weekend for the Harvest Festival series at Bethel Woods Center for the Performing Arts in Bethel. This Sunday it’s the Rosehaven Alpaca Festival, at which you can view alpacas, observe spinners and weavers, and shop for the fine hats, scarves and other items created from their wool. There will be folk and Celtic music and yarn activities for kids and a corn maze, and photographer Jonathan Hyman will be there to discuss and sign his book The Landscapes of 9/11: A Photographer’s Journey. Parking is $2.

This year marks the 40th anniversary of Dark Side Of The Moon, and on Saturday night at Belleayre Mountain in Highmount, they’re celebrating with their second annual Rock Extravaganza. Catch a mind-melting blend of breathtaking orchestra and blazing rock as the Belleayre Festival Orchestra rips into Pink Floyd with a smokin’ band and the vocal chops of Randy Jackson, along with plenty of fog and smoke and pretty colored lights. Lawn seats are $26.

The Catskill Mountain Classic Car Club will be getting together for its End of Summer Cruise on Saturday August 31. They’ll gather from 4-7 at Resort Ridge Pizza at the Phoenicia Plaza in Mt. Tremper for music, eats, trophies and good laughs. Bring your favorite ride, or come see theirs.

Opus 40 in Saugerties will be celebrating in style all weekend long. On Saturday, it’s the Felice County Fair, featuring the Felice Brothers, Amy Helm, Marco Benevento, Connor Kennedy, and the Paul Green Rock Academy All Stars. There’ll be outrageously good local eats from a full half dozen of the finest food trucks and libations by Keegan Ales. General admission is $25, kids ten and under are free, and Catskill Mountainkeeper gets some of the take. On Sunday, they’ll be at it again with stunning 3-finger banjo duets from multiple Grammy winner Bela Fleck and Abigail Washburn; that one’s $45, and happens at 3 pm.

Mystery Spot Antiques in Phoenicia will host Wreckless Eric and Amy Wrigby, recently arrived from France, for a free porch show on Sunday at 3pm. The duo have three acclaimed albums and have toured all over North America and Europe; here’s your chance to welcome them to the Cats.

Saturday afternoon in Kingston’s Stockade, you can mingle with re-enactors from the British Brigade of the 16th Queen's Light Dragoons. They’ll be occupying the Matthew Persen House from 9pm to 5pm. Grab a bite to eat and then attend the Wall Street Jazz Festival, a perennial favorite that starts at 6pm and builds to a massive samba dance in the street at 9pm with Estrella Salsa. It’s free.

Then on Sunday, down at Kingston’s waterfront, celebrate the Hooley On The Hudson, a great big explosion of Celtic love happening from noon to 9pm. There are two stages of music, featuring national and local talent, and a storytelling stage. The Trolley Museum is offering special Hooley On The Hudson rides between noon and 5pm.

The Woodstock-New Paltz Arts and Crafts Fair will be going on all weekend at the Ulster County Fairgrounds in New Paltz. Over 300 juried exhibitors, music, food, and hands-on demonstrations of various crafts for kids and for adults. And this year, someone is bringing alpacas. It must be the year for alpacas. The fair runs Saturday, August 31 and Sunday, September 1 from 10am to 6pm, and Monday, September 2 from 10am to 4pm. Admission is $8 for adults and $7 for seniors; kids under 12 are free.

This Weekend: History from beyond the grave

This weekend: A slew of upstate events for Father's Day

This Weekend: FireFest in Delhi

This Weekend: The Sandy Cause