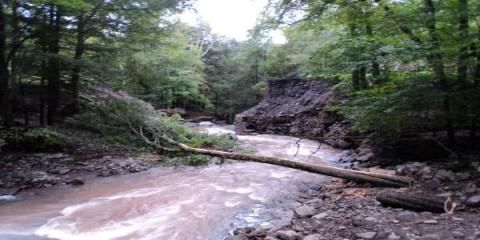 A photo of a Catskills streambank post-Irene, from the Catskill Watershed Corporation website.

Five months after the Irene and Lee floods, streams all across the Catskills region are still clogged with downed trees, trash, pieces of trailers, and other miscellaneous debris. It's a sad spectacle for anyone driving along the banks of the Schoharie or the Esopus -- and more critically, the debris still scattered in the streams could become dangerous if the area floods again.

Funding for stream cleanup has been slow in coming, especially from state and federal sources that some local towns hoped would help. But in December, the Catskill Watershed Corporation (CWC) stepped in to help, setting aside $2.5 million for debris clearing.

Many towns also want to dredge and reshape the new gravel banks that have sprouted up in the wake of the floods. But the CWC is not funding dredging projects. Though some dredging was allowed after the flood, the state Department of Environmental Conservation is generally reluctant to let towns dredge streams without planning and scientific guidance, fearing that by making streams deeper and faster, dredging could increase erosion and make future flooding worse upstream or downstream.

So far, the CWC has awarded $212,345 to local property owners and towns for stream removal.

A press release from the CWC yesterday:

A total of $212,345 had been awarded as of January 25 from the Stream Corridor Protection Debris Removal Program launched by the CWC in December. Projects are in West Shokan (six sites), Shandaken, Chichester, Lanesville and Halcott, where the Town was awarded $37,455 to hire a contractor to clear three sites on Vly Creek.

Applications are under review for ten more projects.

Removing debris will help protect municipal infrastructure, as well as downstream properties that may be harmed should large trees, tanks, lumber and other debris be dislodged in future high-water events.

The $2.5 million program provides grants to Towns, Villages and property owners, or Soil and Water Conservation Districts (SWCD) acting on their behalf.  Funds may be used for labor, fuel, equipment, and materials necessary for flood debris removal.

Applications can be found on the CWC website (cwconline.org), or at the CWC offices, 905 Main St., Margaretville. They may be submitted at any time and will be reviewed by CWC, NYC Department of Environmental Protection and SWCD technical staff who will visit large project sites to examine any removal or disposal issues.

Applicants must coordinate with all regulatory agencies and are responsible for all required permits.

The CWC is a non-profit Local Development Corporation based in Margaretville. It is committed to protecting water resources, encouraging environmentally friendly economic development and supporting watershed education in the New York City Watershed West of the Hudson River, a region encompassing parts of five counties – Delaware, Greene, Schoharie, Sullivan and Ulster.

To learn more about other CWC programs to assist residents and businesses in the New York City Watershed West of the Hudson River, visit www.cwconline.org.