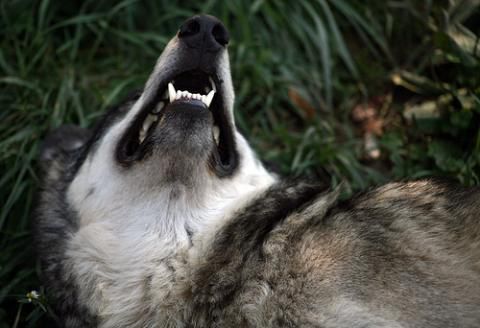 It's official: Wolves are the new cougars.

A study published recently in Northeastern Naturalist, by Roland Kays and Robert Feranec of the New York State Museum in Albany, confirms that a wolf shot in Saratoga County in 2001 was in fact a wild wolf that migrated naturally into the area, not an escapee from a zoo or breeding facility.

The new discovery could shift the debate on how to conserve the gray wolf, a federally endangered species whose conservation plan is currently under review, and which could lose protection in the eastern part of its U.S. range soon.

The DEC issued a statement saying the study shows federal U.S. Fish and Wildlife Service officials need to reverse efforts to remove endangered species protections for wolves in the Northeast.

Said Christopher Amato, assistant commissioner for natural resources, "We continue to believe that natural recovery of wolves in the Northeast is possible and urge the U.S. Fish and Wildlife Service to reconsider its recent proposals and to update its wolf recovery plan to reflect this new scientific information and support the natural recolonization by wolves."

To complicate matters, there is debate in the scientific community over whether the "gray wolf" (Canis lupus) and the "Eastern wolf" (Canis lycaon) are separate species. If the U.S. Fish and Wildlife Service officially determines that they are different species, Northeastern states could be officially removed from the gray wolf's historical range, and any gray wolves migrating into the area would not be protected. From the Adirondack Daily Enterprise:

The U.S. Fish and Wildlife Service is working on its wolf conservation strategies based on changes to the population, among other things. Earlier this year, the Fish and Wildlife Service proposed to remove gray wolves in the western Great Lakes area from the federal list of endangered and threatened wildlife- which includes Minnesota, Michigan and Wisconsin, and portions of adjoining states. Agency officials have said wolves have recovered in this area and no longer require federal protection. The service also proposed to revise the range of the gray wolf in all or parts of 29 eastern states because the eastern wolf has been recently recognized as a full species and not a subspecies of the gray wolf.

Another recent study, of which Kays was a co-author, analyzed the genetic code of dogs, wolves, and coyotes, and concluded that both "Eastern wolves" and "red wolves" were not separate species from the gray wolf, but wolf-coyote hybrids. But the study may not have any impact on the U.S. Fish and Wildlife Service's management plans.

For the study that showed that the wolf killed in Saratoga County was wild, researchers analyzed bone and hair samples from eight wolf specimens killed in the northeastern U.S. The scientists found that three of them had spent their lives in the wild.

The method used to tell wild from captive wolf was rather ingenious: The researchers analyzed the bones for clues as to what kind of diet the wolves had eaten during their lifetimes.

Captive wolves are fed dog food, which contains a lot of corn. Most plants, during part the process of photosynthesis, create molecules with three carbon atoms, and are known as "C3" plants. But corn, along with the 1 percent of plant species known as "C4" plants, creates four-carbon molecules.

C4 plants contain higher levels of carbon-13, a rare isotope of carbon. By analyzing how much carbon-13 is in in a sample of bone or hair, scientists can tell how much of an animal's diet was based on C4 plants. Higher levels mean that the animal was more likely to be captive or domestic.

Have you seen animals that might be wolves in the Catskills? Leave a comment below, or send your wolf tales to [email protected].