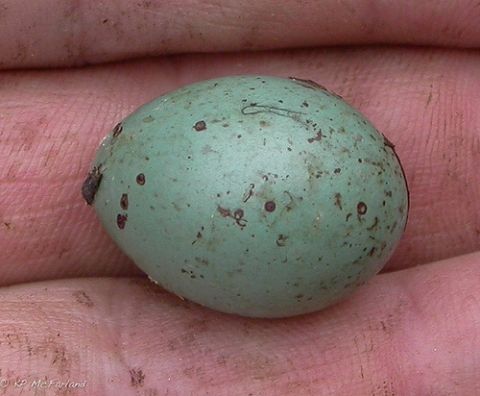 Above: The egg of a Bicknell's thrush, Catharus bicknelli. Photo by Flickr user Kent McFarland; published under Creative Commons license.

If there's one creature birdwatchers hope most fervently to find on a trip to the Catskills's high peaks, it's probably the rare, reclusive Bicknell's thrush, a plain little brown songbird that was discovered here on Slide Mountain in 1881. Bicknell's thrush lives only in high-elevation spruce and balsam fir forests, and fewer than 125,000 of them exist today. The species is considered vulnerable to extinction by international conservation scientists, and the U.S. Fish and Wildlife Service is currently considering listing it as a federally endangered species.

In the winter, like many songbirds, the little thrush migrates south, traveling some 1,200 miles to the Caribbean. Both of the thrush's habitats are threatened -- in the north, by wind power projects, acid rain and the effects of climate change; in the south, by deforestation from agriculture, logging and charcoal production.

Conservation scientists think that by working together across the 1,200-mile gap between the bird's two habitats, they can give the species a better chance of surviving. This week, the International Bicknell's Thrush Conservation Group announced a first step down that path: A small grant for a collaboration between scientists in the Dominican Republic and the Northeastern U.S.

The Adirondack Community Trust has donated $5,000 to the collaboration. The funding will be spent on searching for and studying Bicknell's thrushes in the southern Sierra de Bahoruco, a Dominican mountain range that is an important part of the bird's winter habitat.

A recent press release about the grant states that most of the research done on the thrush to date has focused on its North American breeding grounds in the U.S. and Canada. The need for more study is greatest in the Caribbean part of thrush's range, scientists say:

“The Bicknell’s Thrush has two homes – one here in North America and the other in the Caribbean Basin,” said Chris Rimmer, executive director of the Vermont Center for Ecostudies, a research group working to conserve the thrush. “Our efforts to protect this vulnerable songbird can’t stop at the water’s edge. We need to concentrate our work where the threats are most severe and imminent.”

A scientist with Grupo Jaragua, the Dominican team that will be conducting the research, said that studying the bird's winter habitat will lead to better conservation of the region's other rare species as well:

Sixto Inchaustegui, a senior scientist with Grupo Jaragua, said the grant would allow his team to establish an essential local presence in a forest under heavy pressure from illegal agricultural expansion and charcoal production. “By better understanding Bicknell’s Thrush and its conservation needs,” he said, “Jaragua and our partners will more effectively tackle pressing issues that threaten all biodiversity in this sensitive region.”

The Adirondack Community Trust is seeking more donations to the Bicknell's Thrush Habitat Protection Fund to continue working with the Dominican scientists. Among other groups involved are the Vermont Center for Ecostudies and Audubon New York. For more information, see the International Bicknell's Thrush Conservation Group website.

Below: A 2010 video of Vermont Center for Ecostudies biologist Brendan Collins banding a Bicknell's thrush on Slide Mountain in the Catskills.