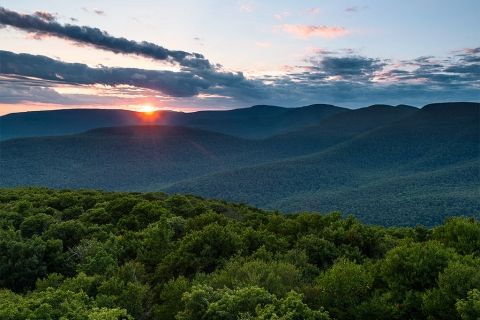 View from the top of Overlook Mountain. Photo by Greg Miller; courtesy of the Open Space Institute.

Over 250 acres near the summit of Overlook Mountain in Woodstock became part of the Catskill Forest Preserve recently, with the completion of a long-planned purchase of two land parcels by the state Department of Environmental Conservation (DEC) from the Open Space Institute (OSI).

The two properties -- a 191-acre area known as the California Quarry property, once owned by the town of Woodstock, and a 75-acre parcel that once belonged to the Kharma Triyana Dharmachakra monastery near the Overlook trailhead -- were bought for preservation by the OSI in 2008 and 2005 respectively. The state paid $857,800 for the pair of properties, from the Environmental Protection Fund.

With the recent transfer of the two properties to the state, announced by the DEC on Monday, all 266 acres will become part of the Overlook Wild Forest in the Catskill Forest Preserve. State ownership of the land will protect recreational access and Overlook's legendary views as well as the mountaintop ecosystem, the OSI's Jeff Simms said.

"That's going to protect wildlife habitat, water quality, biodiversity, and also there's also the scenic viewshed on it," Simms said. "People have appreciated that viewshed for a long time. It would be irreparably damaged if housing developments started to creep up the side of the mountain."

In a press release issued Monday, the DEC stated that the agency would pay full property taxes on the land.

Included in the release were statements from the Open Space Institute's president, the town supervisor of Woodstock, the president of the Woodstock Land Conservatory and a local biologist:

"This acquisition expands the Overlook Wild Forest and protects important habitat and watershed in the eastern Catskill Park," said Kim Elliman, the president and CEO of the Open Space Institute. "Just as important, it permanently protects the magnificent views of Overlook Mountain from the Town of Woodstock and surrounding areas in the Hudson River Valley."

"This acquisition will provide significant protection of the south face of Overlook Mountain, the dominant landscape feature in Woodstock, and will be appreciated by generations of Woodstock residents," said Town of Woodstock Supervisor Jeremy Wilbur.

"The Woodstock Land Conservancy (WLC) is delighted that these two significant acquisitions have been conveyed to New York State," said Patricia Goodwin, President of WLC. "Both are products of WLC's highly successful public-private partnership on the Save Overlook campaign with the Open Space Institute and the NYS Department of Environmental Conservation. These lands have breathtaking views of the southeastern Catskills, Shawangunk Ridge and Hudson Valley."

Ingrid Haeckl, a biologist with Hudsonia, said, "These parcels expand the area protected in one of the largest intact Catskill forest cores and provide important habitat for far-ranging animals including black bear, bobcat and timber rattlesnake. The California Quarry parcels include significant valuable crest, ledge and talus habitat, and high quality areas of chestnut oak woodland, as well as numerous small wetlands on the ledges. Protection of those parcels also protects significant cultural assets, including large old bluestone quarries."