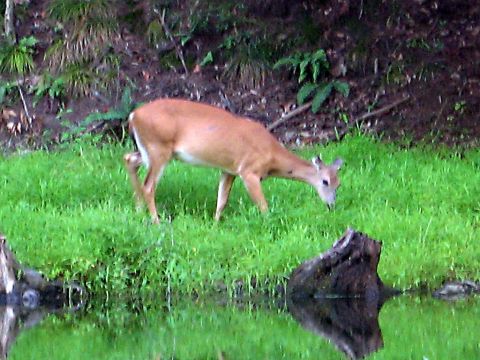 Above: A white-tailed deer browses at the shore of the Ashokan Reservoir. Photo by Flickr user Ken Ficara; published under Creative Commons license.

Local hunters, New York City wants your help: The burgeoning deer population around the Ashokan Reservoir is interfering with the regrowth of the forest, city officials say. To keep deer numbers in check, the city Department of Environmental Protection (DEP) recently announced the opening of two areas near the Ashokan to hunting, for hunters who get special permits from the DEP.

When deer populations get large in forested areas, studies have found that their browsing has intense impacts on young tree seedlings, reducing tree diversity and interfering with the regeneration of the forest. A DEP press release about the new hunting areas notes that the agency relies on thriving forests to preserve water quality:

Deer in large numbers stifle forest regeneration by eating saplings from the forest floor before they have a chance to grow and become mature trees. Healthy forests are important to the quality of drinking water in the reservoirs as they act as a natural filter that helps remove nitrogen, phosphorus, and other nutrients from the water that can affect taste and smell. Their leaves and branches also slow rain as it falls, and their roots grip the soil to help prevent erosion.

Five city-owned parcels near the Ashokan are already open to hunters carrying normal state-issued deer hunting permits. The rules for the two new areas will be different: To hunt in the new areas, whether by bow or by gun, hunters will have to apply to the DEP for special Deer Management Assistance Permits. The permits will allow hunters to take only antlerless deer.

The new hunting areas span 1,037 acres: a 579-acre parcel on the north side of the Ashokan's east basin, called the Glenford Unit, and a 458-acre parcel on the south side of the east basin, called the Mile Shore Unit. The Glenford Unit will be open only to bow hunters; both bow and gun hunters will be able to hunt in the Mile Shore Unit.

The DEP will hold an information session for anyone interested in the program tonight (Wednesday, October 24) at 7pm at the Woodstock Fire Department on Zena Road. On hand will be biologist Dick Henry of the Hudson Valley Quality Deer Management Association, who will talk about the breeding biology of white-tailed deer, as well as DEP staff, who will discuss the agency's deer management program. The agency will also have detailed maps of the new areas at the information session.

For more information from the DEP about the program, or to apply for a Deer Management Assistance Permit, contact the DEP at 845-340-7811.