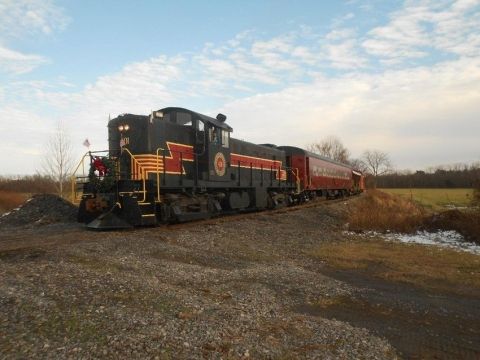 A rail trail deal struck last week between Ulster County and the New York City Department of Environmental Protection may be the death knell to the Catskill Mountain Railroad's long-held goal of restoring train service all the way across the county, in an unbroken route from Kingston to Shandaken.

But CMRR chairman Harry Jameson is willing to give up the dream, if it means the railroad can keep running trains in Kingston.

"If this is the plan, and there's no turning back, then we support it," Jameson said, referring to a recently-announced plan to put $2.5 million in DEP funds toward an 11.5-mile walking trail along the Ashokan Reservoir. "But we're a little disappointed that they haven't had the vision to do both [rail and trail]."

The CMRR, which holds a lease on the county-owned tracks until May of 2016, currently runs tourist train service on both ends of the old Ulster & Delaware corridor in Ulster County: a short route in Kingston, and a longer route running between Phoenicia and Mount Tremper. In the middle sits the Ashokan Reservoir, surrounded by New York City-owned watershed land.

The reservoir forces a choice between rail and trail; the DEP has long held that the slopes are too steep and the right-of-way too narrow to allow for both an active railroad and a walking trail near the reservoir. Last week, the DEP officially came out in favor of trail, not rail, in a $2.5 million deal struck with Ulster County officials.

For months, the railroad and the county have been locked in legal battle over the future of the Ulster & Delaware corridor, with neither willing to cede the goal of an unbroken route across the county. County officials are backing a walking and biking trail that would stretch from Kingston to Highmount, and connect with the Walkway Over The Hudson and other trails in the Hudson Valley.

In a statement issued on Friday, Dec. 13, the CMRR proposed an alternative that has not yet been part of the public discussion: A plan that would expand the railroad's routes on both ends of the corridor, but would give most of the Ashokan Reservoir portion over to the trail-builders.

In the news release, the CMRR proposes extending its Kingston route to the West Hurley Trail Head, and extending its western route to include about a mile of the 11.5-mile Ashokan right-of-way, giving riders views of the Ashokan Reservoir. The release advocates for mixed uses for the Ashokan area:

The CMRR believes that 100% trail use of the 11.5-mile Ashokan Rail Trail is too exclusive and does not allow the full potential of the Ashokan Reservoir Rail Trail to be reached without rail access on either end. By allowing the westernmost mile or so to remain a railroad, and to allow a rail with trail terminal at West Hurley on the eastern end, the County can maximize the benefits of open access to the Ashokan Reservoir to all.

The CMRR also announced that in 2014, the railroad plans to bring Thomas the Tank Engine and Polar Express train attractions to Kingston.

Since 2012, Ulster County executive Mike Hein has sought by various means to get the railroad to give up its Kingston route -- a proposal the railroad has rejected. In June, the county issued the railroad an ultimatum threatening them with eviction, starting a legal battle that is still playing out in court.

In an interview on Friday, Jameson told the Watershed Post that giving up the Kingston end of their operation would be financially unsustainable for the railroad, which is organized as a for-profit business. Expanding to West Hurley, even at the cost of a long-held goal of uniting the railroad's two ends, would give ridership a boost, Jameson said.

"If we were able to operate from Kingston to West Hurley, not only will it keep us in business, but it will make a significant impact on Kingston," he said.

Jameson said that in the ongoing legal dispute with the county, the railroad has offered settlement terms similar to what they are currently proposing: If the railroad can run trains from Kingston to West Hurley, and if the county releases FEMA funds for restoring track washed out by Irene flooding, they would be willing to cede the Ashokan Reservoir piece of the corridor to a walking trail.

So far, Jameson said, the county hasn't been willing to make a deal.

For his part, Hein is showing signs of possibly wanting to cut a deal with a different railroad company to serve the existing western route. In a story in today's Daily Freeman, Hein tells a reporter that the county is willing to look elsewhere:

Asked whether he envisioned the Catskill Mountain Railroad as the continuing provider of rail service, Hein said: “I don’t think the county is bound to any particular for-profit company.”

The other railroad operating in the region, the Delaware & Ulster Railroad, is a nonprofit funded largely by the locally-based O'Connor Foundation.

Below: The full text of the Catskill Mountain Railroad's recent news release.