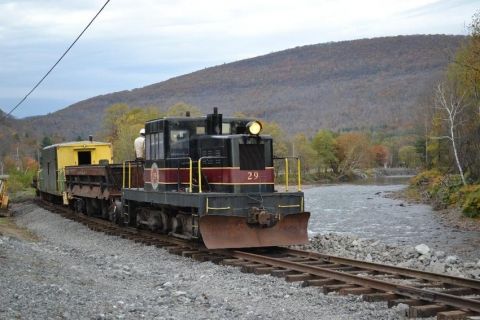 Above: A Catskill Mountain Railroad train heads west to Phoenicia, for the first time since the 2011 Irene floods washed out part of the railroad's track. The railroad used ticket sales to fund the rebuild, since FEMA funding to repair the track is still frozen at the county level. Photo by Al Johnson.

There is still no end in sight to a long-festering dispute over the future of Ulster County's rail corridor. But for now, the Catskill Mountain Railroad has won a couple of hard-fought victories.

In a ruling on Wednesday, Nov. 6, a judge granted the Catskill Mountain Railroad (CMRR) a reprieve from a threat of eviction by Ulster County, which owns the tracks the railroad rolls on.

The same week, the CMRR alerted local media that its volunteer workforce had restored train service to Phoenicia, two years after a portion of the track was destroyed by Tropical Storm Irene.

The much-anticipated court ruling, issued by state Supreme Court judge Richard Mott, will allow the railroad to keep operating under the terms of its 25-year lease from the county, which is up in May 2016. Mott also ordered the CMRR to pay the county a $75,000 surety bond by Nov. 29, as a kind of security deposit to ensure funds are available to perform any unfilled maintenance and repair obligations at the end of the lease term.

Rail with trail: Devil's in the details

At the heart of Ulster County's railroad battle are two competing visions for the railroad corridor.

Trail advocates, who have the ear of the county's top officials, want to see an unbroken walking and biking trail stretching all the way from Highmount to Kingston, where it would connect with a larger network of trails crisscrossing the Hudson Valley. In this scenario, the railroad could still operate its western segment, from Phoenicia to Boiceville, but would have to give up a small section of active track in Kingston.

If built, the trail would also put an end to the railroad's long-held ambition of connecting the Phoenicia and Kingston ends of its track.

Railroad supporters are advocating a “rail-with-trail” plan, with walking and biking trail running alongside the railroad throughout much of the corridor. But where the railroad runs through New York City-owned land near the Ashokan Reservoir, the right-of-way is too narrow for both uses, forcing a break in the trail in order to let the railroad keep running.

Map of CMRR's route. Active sections of track are marked with a solid line; the dashed line indicates sections of the track that are not in use. Source: CMRR website.

The dispute went public late in 2012, when Hein announced the county's plans for the trail -- and included $642,000 from the sale of track as scrap metal in the county's 2013 budget.

The relationship between the railroad and its county landlords continued to deteriorate until June of 2013, when the county issued the railroad a “demand to cure” notice, alleging violations of the lease including failures to rehabilitate one mile of the track per year, to keep the right-of-way clear of brush and trash, and to pay the county an agreed-upon percentage of the company’s gross revenue.

Upon receipt of the demand, the CMRR filed a lawsuit against the county, asking the state Supreme Court to uphold the terms of the lease.

The CMRR’s suit also alleges that the county has acted in bad faith with regard to releasing funds for track repairs made necessary by Irene flooding. After the storm struck in 2011, the parties applied for federal funding to make the repairs. The Federal Emergency Management Agency (FEMA) granted the funds to the county, but no money has been issued to the CMRR since, according to the railroad's complaint in the lawsuit. In a recent news release, the CMRR announced that it had repaired “Campground Curve,” a portion of track wiped out by Irene, by using revenues raised by ticket fairs and tourist operations.

The county has filed counterclaims of its own, alleging it was owed $1 million in damages that resulted from defaults on the lease.

While the judge has agreed to the injunction, effectively allowing the railroad to continue its operations, the other claims in the lawsuit haven’t yet been resolved. The judge ordered the two parties to a scheduling conference on Dec. 16, which will determine how the case proceeds.

The railroad’s goal now, according to CMRR chair Harry Jameson, is to sit down with the county and “come to grips with a resolution” with the county.

County attorney Beatrice Havranek declined to be interviewed by the Watershed Post, but emphasized the judge’s order for the CMRR to post the $75,000 surety bond.

“The judge agreed in his decision that the Catskill Mountain Railroad hasn’t fulfilled its obligations to the county,” she said.

Tensions with the City of Kingston boiled over in April, when mayor Shayne Gallo sought an injunction on behalf of the city, as part of a suit filed against the railroad.

When the CMRR began to move railcars along the track’s Route 209 corridor, the city asked state Supreme Court judge Christopher Cahill to order the railroad not to move coaches into its Kingston railyard.

In its complaint, the city alleged the care were in a “dangerous and decrepit condition, literally crumbling, rusted out, windowless with peeling and flaking paint,”and moving them would threaten the health, safety and welfare of the city’s residents and visitors for years to come. According to the complaint, the city’s health department found the cars to be in poor condition, containing high levels of pesticides and lead paint.

After the judge issued a temporary order blocking the moving of the coaches, Kingston city workers parked a dump truck across the tracks to block the railroad from using them.

The railroad agreed to conduct its own study of the cars, and according to Jameson, spokesman for the CMRR, the results indicated that moving the cars would be safe. The city has not responded to the CMRR’s study, and the lawsuit for now remains unresolved.

Above: The CMRR's new billboard on Route 28, advertising SaveTheRails.org, the railroad's online campaign to convince Ulster County residents that the county would be better off keeping the railroad tracks intact. Photo courtesy of the Catskill Mountain Railroad.

The court of public opinion

Outside of the courtroom, the railroad is waging a separate battle for the hearts and minds of local residents. The railroad has launched a Facebook page called All Aboard for Ashokan and a web campaign at SaveTheRails.org, and recently erected a billboard on Route 28 to promote its cause.

On the other side of the issue: the Friends of the Catskill Mountain Rail Trail, a group that is advocating for the unbroken trail from Kingston to Highmount. A recent report commissioned by the New York/New Jersey Trail Conference claimed that if built, the trail would yield $3.1 million in benefits to the region.

The CMRR is pushing a report of its own, a set of updated “vision documents” -- written, Jameson said, to clarify misinformation about the railroad’s economic benefits, impacts on tourism and the City of Kingston, and its positive stance on a “rail with trail” compromise.

Jameson attributed the tensions between the CMRR and Ulster County in part to the election of Mike Hein as county executive in 2008. Hein bought into the trail advocates’ plan, Jameson said.

“The proposal for us was, 'You have to get out of Kingston and run your little operation in Mr. Tremper and be happy with that,'” he said.

Kevin Smith, co-chair of the Friends of Catskill Mountain Rail Trail, said the railroad's problems with the county aren't political.

“From Ulster County’s perspective, this is not a sudden shift that coincided with the change in government and the election of Mike Hein,” said Smith. “This goes back much further than that.”

While he acknowledged the CMRR’s dedication and volunteer work, Smith said that his organization believes that the railroad’s performance in regard to the lease “leaves a lot to be desired.”

Even if the CMRR complies with their lease, Smith said, trail advocates -- and county officials -- believe that a railroad is simply not the best use of the county-owned corridor. The success of recent projects like the Highline in New York City and the Walkway Over the Hudson in Poughkeepsie has lent strength to a growing movement to convert old railroad corridors to rail trail.

“There has been a sea change in the understanding of what these linear corridors provide, the economic development they stimulate, and therefore their many-faceted value,” Smith said.

Both sides agree that the corridor has huge tourism potential.

“The only thing we have in this county is tourism,” said Jameson, who also owns the Town Tinker Tube Rental in Phoenicia, a popular summertime tourist attraction. “[The railroad] was the first tourist destination in America. There's no reason why that can't be recreated.”