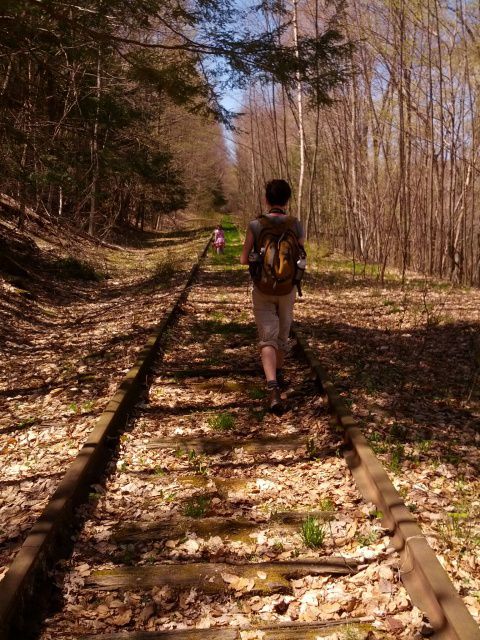 Above: The old Ulster & Delaware rail tracks near Cathedral Glen on Highmount. Photo by Julia Reischel.

A controversial plan to convert Ulster County's old rail corridor into a walking trail from Kingston to Highmount got a boost on Monday, with the release of a new study of the trail's potential economic impact.

If built, the Catskill Mountain Rail Trail would allow hikers and bikers to go all the way from downtown Kingston to the Belleayre Ski Center, with access to the old Ulster & Delaware right-of-way that runs alongside the Ashokan Reservoir, currently closed to foot traffic. For trail advocates, it would be the realization of a long-held vision for the future of tourism and outdoor recreation in the region.

But the rail trail would also come at a cost. Building the trail as an unbroken route would require the eviction of the Catskill Mountain Railroad from the eastern end of the old Ulster & Delaware tracks, the scrapping of most of the railroad tracks, and an end to the railroad's long-term goal of uniting the two active ends of its line, restoring freight and passenger service across the county from Kingston to Phoenicia. The private, for-profit railroad currently has a 25-year lease on the corridor that runs through 2016, but a recent legal demand issued to the railroad by Ulster County raises the possibility that the railroad could be evicted before its lease is through.

Since county executive Mike Hein first announced his support for the rail trail in October of 2012, trail supporters have claimed that the rail trail would bring visitors and tourist dollars into Ulster County. The new study (embedded below) puts some numbers behind that claim: About 140,000 visitors a year to the trail, and roughly $3.1 million in direct and indirect spending, according to study authors.

The study of the economic impact of the proposed Catskill Mountain Rail Trail was commissioned by the New York-New Jersey Trail Conference, a hiking group that maintains about 200 miles of trail in the Catskill Mountains, and carried out by Camoin Associates, an economic analysis firm in Saratoga Springs. Funding for the study was donated by the Hudson Valley-based Dyson Foundation and by Sean Eldridge, a Hudson Valley investor and possible candidate for the 19th District's Congressional seat in 2014.

In a conference call on Monday with trail supporters and local media, NYNJTC executive director Edward Goodell said that Ulster County did not fund or commission the study. The hiking group's interest in the trail predates Hein's involvement in the plan, he said.

"We've been interested in this project for more than a year, and of course we were delighted when the county executive came out with a plan for it last fall," Goodell said. "We've been involved in other rail trails, and we've seen how they can transform entire communities and regions."

The trail has backing from several local outdoor groups, including the Woodstock Land Conservancy and the recently-formed Friends of the Catskill Mountain Rail Trail. The Olympic Regional Development Authority, which runs the state-owned Belleayre Ski Center, is also interested in the trail, according to trail advocates. The trail has the potential to tie in with cross-country skiing, mountain biking and other recreational use of the 1200-acre Big Indian parcel that was transferred in 2011 to the state from private Belleayre resort developer Crossroads Ventures.

The study used visitor data from other trails, including the recently-created Walkway Over The Hudson and trails in other parts of New York State and the Northeast, to estimate how many visitors would use the trail and how much they would spend.

While the study puts some data behind trail advocates' claims that a rail trail would be an economic boon to the county, it does not consider any economic losses from the shutdown of part of the currently active railroad, or potential losses from closing off any hope of restoring the railroad's route across the county.

The railroad's recent ridership numbers are a fraction of the number of visitors estimated for the rail trail. According to data from Ulster County planners, peak ridership is about 12,225 riders a year, 75 percent of them on the western end of the railroad's active line, which would be preserved under the rail trail plan.

The Catskill Mountain Railroad put forth its own study, earlier this year, for a combined rail-with-trail proposal that would allow for walking paths along much -- though not all -- of the railroad corridor, and would allow the railroad to keep its Kingston route and continue to expand.

Goodell said that the cost of rail-with-trail would be much greater than the cost of building just a walking trail.

"The cost of doing a combination project would be very large compared to trail alone," he said.

The current study does not estimate the costs of either plan. Neither Ulster County nor trail advocates have yet released detailed figures on how much the Catskill Mountain Rail Trail would cost to build and maintain, or how it would be funded.

A few estimated numbers from the study: