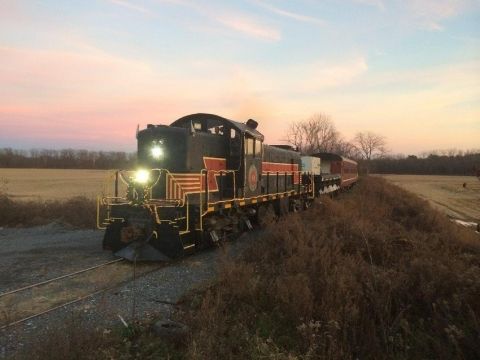 Above: The Catskill Mountain Railroad during a Polar Express event in 2015. Photo via the CMRR's Facebook page.

It's a holiday miracle: Railroad fans, trail enthusiasts and Ulster’s County’s executive have decided to end a three-year feud over a county-owned railroad right-of-way.

Neither railroad fans nor trail enthusiasts, who have been at each others' throats for years, will get an unbroken corridor of trains or trails all the way across Ulster County from Kingston to Shandaken on the old Ulster & Delaware railroad tracks.

But both sides have agreed to stop fighting and work together to split the corridor between trails and trains as best they can in a "segmented rail with trail plan."

Since 2012, the CMRR, the Friends of the Catskill Mountain Rail Trail and Ulster County Executive Mike Hein have fought a nasty public battle over rails versus trails.

Ulster County owns the 36.8-mile former Ulster & Delaware railroad corridor, and for over 30 years the CMRR has operated a tourist railroad on portions of the old track, leasing the right to run it from the county.

The CMRR has maintained portions of the tracks, but has allowed some to fall into disuse. (Between Phoenicia and Big Indian, the rails have completely deteriorated and forest has taken over in places, according to a consultant's report.)

In 2012, trail supporters floated the idea of not renewing the CMRR’s lease when it expires in 2016 and instead turning the rail corridor into a hiking, biking and walking trail.

Controversy ensued. There was name-calling, public outcry and litigation. Rail enthusiasts were horrified that the county would consider removing an historic railway. Trail supporters accusing the railway of financial mismanagement and of monopolizing a public resource for a small group of hobbyists.

The railroad issue dominated Ulster County politics for years. This fall, it played a central role in Hein’s race for re-election when two challengers attempted to oust him by rallying fans of the railroad. (Hein was re-elected despite the opposition from railway fans.)

The result, outlined in the consultant’s report and in Resolution 488, is a “segmented rail with trail” plan that partitions the corridor into “railroad-only segments, trail-only segments, and rail-with-trail segments."

The railroad will keep its tracks in Kingston, where it has recently started a popular event series that includes the Polar Express, Thomas the Tank Engine and other specialty train rides.

The county and the trail boosters will turn 11.5 miles of track alongside the Ashokan Reservoir into a public walking trail that will allow people to enjoy the spectacular vistas on the shore without a permit for the first time in 100 years, according to a press release issued by Hein. (In another resolution that passed on Tuesday, the legislature earmarked $1 million in funding from the  New York City Department of Environmental Protection to design and engineer that trail, called the Ashokan Rail Trail.)

Trains in Kingston; trails at the Ashokan Reservoir

As in any good compromise, everybody gave something up in this rail-trail deal.

The Friends of the Catskill Mountain Rail Trail will stop trying to oust the railroad from its tracks in the city of Kingston, and will postpone their dream of an unbroken 38.6-mile trail that stretches from Kingston to Belleayre Mountain at the western edge of Ulster County. The group still hopes to preserve "connectivity" of trails throughout the Catskills and the Hudson Valley, but knows that it won't happen for a while.

The railroad will abandon its attempts to control the entire corridor, and concedes the banks of the Ashokan Reservoir to the trail boosters. The CMRR is also toning down its rhetoric, moving away from an all-or-nothing defensive crouch to a more open negotiating stance.

In exchange, the CMRR not only gets to keep its Kingston tracks, but gets the county’s support to run on almost five miles of corridor heading uphill out of Kingston into the Catskills, according to Ernie Hunt, the railroad's president. The railroad is still holding out hope to eventually run all the way to the Glenford Dike at the edge of the Ashokan Reservoir, Hunt said.

“I think that each group stated what they needed the most, and that the effort was made to preserve what was need most for each group,” said Kathy Nolan, the senior research director for Catskill Mountainkeeper and a staunch trail supporter.

The text of Resolution 488 and Hein’s press release contain a concise roundup of exactly which segments of the corridor will have trail, rail or both:

"Fatal flaw:" One section too narrow for rail and trail

One stretch of the rail corridor, between Route 28A in Hurley and Basin Road in West Hurley, runs on a filled-in section between sensitive wetlands. It’s simply too narrow to accommodate both rail and trail at the same time. (The consultant calls it the “fatal flaw” for a rail-with-trail solution.)

This stretch is something neither the rail fans nor the hiking fans are willing to give up, yet. But for now, they’ve all agreed to make it a demilitarized zone.

This week, the legislature decided to hold off on earmarking that stretch of track for either trains or trails. Instead, the resolution kicks that decision down the road, after "further investigation."

“It’s the most difficult to put both of them together there, and there’s no obvious alternative,” Nolan said. “The legislature just wasn’t ready to decide it either in favor of the railroad or in favor of the trail.”

Both sides hold out hope that they’ll be able to work it out.

“We think that can be resolved with further study,” said the CMRR's Ernie Hunt.

“Best of both worlds”

While nobody got everything they wanted in the rail-trail compromise, all the combatants issued pleased statements on Tuesday.

“This revised policy now allows Ulster County residents and visitors alike to have the best of both worlds,” Hein said in a statement. “It has been my great hope from the beginning to make this corridor available to both rail and trail, and the revised legislative policy shares and supports this vision.”

Kevin Smith, the co-chair of the Friends of the Catskill Mountain Rail Trail, called the compromise “difficult but incredibly valuable.”

“The rail and trail compromise is a win for everyone,” he said. “This amended policy protects trail connectivity from Kingston to the Ashokan Reservoir while also allowing tourist railroad operations to continue in Kingston."

“While the CMRR did not get everything it requested, we support the resolution and look forward to working with the county and the trail community to make the U&D Corridor a world class rail and trail attraction,” said Ernie Hunt, the president of the CMRR, in a statement. “We support this compromise and look forward to de-escalating the conflict with the county and the trail community."

Specifically, Hunt hopes that the ongoing litigation between Ulster County and the CMRR will soon be resolved, hopefully early next year.