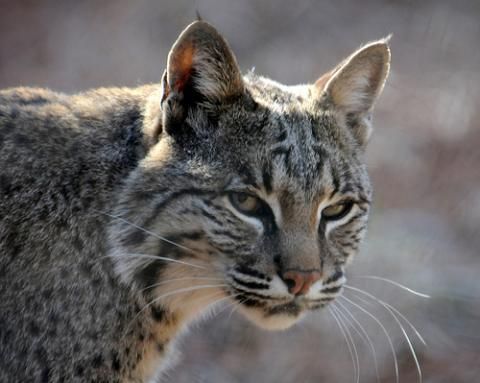 New York's bobcat population is growing, says the New York State Department of Environmental Conservation (DEC). The elusive cats, found mostly in the Catskill, Taconic and Adirondack mountains in the state, are increasingly moving into central and western New York.

The DEC thinks the state's growing bobcat population can sustain an expanded hunting season. The agency is considering allowing bobcat hunting in territory where it is currently off-limits, and in some places extending the season. The AP reports:

Trappers and hunters have killed about 400 to 500 bobcats a year in recent years. Some bobcats are stuffed by taxidermists, but most are killed for their pelts, which sell for $50 to $200.

DEC estimates that fewer than 100 additional bobcats a year will be killed if its plan takes effect.

The proposed changes to the DEC's bobcat hunting policy are in the agency's draft management plan for the species, which would take effect through 2017.

From the maps of the draft plan, it appears the season throughout most of the Catskills region would remain the same. But a large area to the north and west of the region, where hunting the animals is currently prohibited, would be opened up to bobcat hunting.

In the northern Adirondack region, where trapping of bobcats has been more limited than in the Catskills, the DEC proposes extending the end of the trapping season from December 10 to February 15, to match the end of bobcat hunting season.

The agency says that the changes will simplify the regulations:

These proposed changes will result in a greatly simplified season structure (concurrent season dates for both bobcat hunting and trapping for all WMU’s [Wildlife Management Units]). This will make it easier for hunters and trappers to interpret the seasons and ease enforcement for Division of Law Enforcement personnel.

The DEC will be accepting public comments on its draft management plan through February 16.

The draft plan is posted in full below.