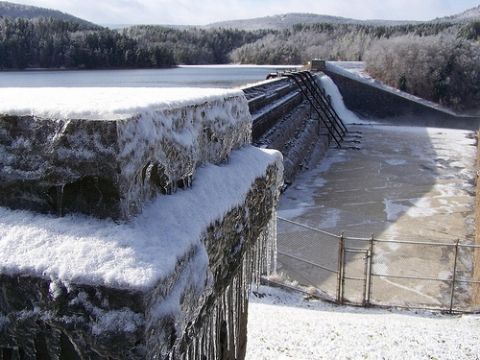 In the coming weeks, the New York City Department of Environmental Protection will install two massive siphons in the Gilboa Dam, which has been under construction to repair damage sustained during the record-busting floods of Tropical Storm Irene in 2011.

That's good news for those downstream of New York City's Schoharie Reservoir, where local advocates see the siphons as a much-needed means of drawing down water when flooding is in the forecast. But it also means a few weeks of muddy water flowing down the Esopus, where the city's water releases have become a source of fierce local ire, and a political punching bag for county executive Mike Hein.

A DEP press release issued on Friday stated that the agency will be working over the next three weeks to install one or both of the siphons. In order to lower the reservoir level enough to complete the work, the DEP will be discharging water from the Schoharie into the Ashokan Reservoir via the Shandaken Tunnel. In turn, to keep Ashokan levels from rising, the DEP will release water from the Ashokan Reservoir into the lower Esopus. The water releases have been approved by the state Department of Environmental Conservation.

A tale of two counties

Schoharie Valley residents may be glad to see the Gilboa Dam work progressing, but the news of new Esopus water releases has prompted a fresh round of outrage from Ulster County.

On Thursday, a day before the DEP announced the Gilboa Dam work and Esopus water releases, Ulster County executive Mike Hein sent out a press release blasting the agency for continuing to dump muddy water into the Esopus -- and excoriating the state DEC for allowing the releases. Hein said in the release:

“This is yet another example of NYC DEP’s mismanagement outside of Ulster County negatively impacting the people of Ulster County. Over the course of the last year, Ulster County rebuilt 100% of our infrastructure damaged during Hurricane Irene.  We accomplished this ahead of schedule and under budget. Yet NYC DEP, only now with the Schoharie Reservoir spilling, seeks to install a siphon capable of lowering the reservoir.  Had the NYC DEP planned ahead and done this during the summer months, this would not be necessary now.

NYC DEP’s plan of action is purely operational, meaning that it is going to be accomplished for DEP’s benefit only, not the health or safety of the Lower Esopus or the people Ulster County.  Better planning, which considered the needs of Ulster County’s residents and businesses along the Esopus Creek would have reduced the need for these releases. I implore the NYS DEC to hold the NYC DEP accountable for its ongoing disgraceful, environmentally-damaging behavior.”

It's not the first time locals in Schoharie and Ulster County have disagreed on how the city's reservoirs ought to be managed. Ahead of Sandy's arrival in the region, the DEP released massive amounts of water from the Schoharie Reservoir through the Shandaken Tunnel -- a decision that was welcomed by Schoharie officials, but opposed by Hein and Shandaken town supervisor Rob Stanley.

The installation of the Gilboa Dam siphons was originally slated to be completed by now. DEP spokesman Adam Bosch said that two extreme weather events this fall forced the agency to put a temporary halt to the Gilboa Dam repairs.

"We got waylaid a couple of times --a rainstorm in September, and we paused again when Sandy began blowing stuff all over the place," he said. "That's why we find ourselves installing the siphons now. It's not because we were sitting back during the summer."

The siphons are a tool for lessening the impact of flooding in the Schoharie Creek basin, downstream from the reservoir.

The prospect of going through a winter without the siphons was worrisome to Dam Concerned Citizens, a nonprofit group that advocates on flooding and reservoir issues for residents of the Schoharie Valley. On October 16, DCC's Harold Bartholomew sent a letter to Assemblyman Pete Lopez and state Senator James Seward, urging them to push the state DEC to allow the DEP's work on the siphons to continue. Bartholomew wrote:

In this regard, could you and Senator Seward obtain a waiver or whatever other mechanism of relief is necessary to permit the opening of the Shandaken Tunnel, thus allowing work on the siphons to be completed?...

...it would be a tragedy indeed, if a snowmelt induced flood similar to that of Jan. 18-19, 1996 were to needlessly occur because the lack of the void creating capability of the siphons.

Although the work at the Gilboa Dam means a lot of muddy water going through Ulster County over the next few weeks, the long-term effect of installing the siphons could be to lessen the city's turbid-water releases into the Shandaken Tunnel and lower Esopus.

"If we have another outlet to release water from the Schoharie, chances are we can significantly reduce the need to make releases under the Interim Protocol for the Ashokan, which is in everybody's interest," said Bosch.

The siphons are also important for flood protection, Bosch said.

"We'll have another way to get water out of the reservoir before a storm comes. Hopefully, that will lessen the flooding risk in those downstream communities, which include communities in Ulster County," he said.

Saugerties supervisor Kelly Myers, who has been a vocal critic of the DEP's water releases into the Esopus, told the Daily Freeman recently that she was hopeful that the work on the Gilboa Dam would alleviate some of Ulster County's muddy-water woes.

“By putting up with three weeks of turbidity now, we will allow them to be able to have the means to divert this turbid Gilboa reservoir water to the Schoharie Creek for the future instead of the Esopus,” Myers said. “This is a good step toward the goal of decreased turbidity in the Esopus, and it also helps DEP maintain/repair, the Gilboa Dam, which is essential for the safety of residents of the Schoharie Valley.”