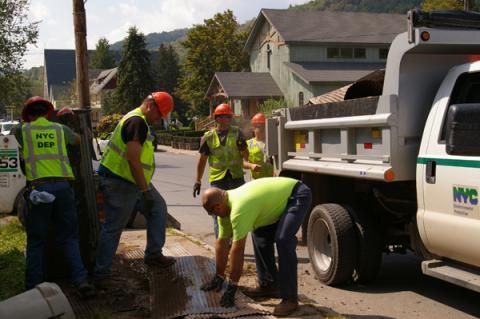 Above: DEP employees cleaning up flood debris in downtown Margaretville on September 13, 2011. Photo by Lissa Harris.

The New York City Department of Environmental Protection announced this morning that they will donate $1 million to a fund to help businesses in the city's upstate watershed recover from the damage wreaked by recent flooding.

The money will go to the Catskill Watershed Corporation's Catskill Fund for the Future, which has already set aside $5 million to help businesses make structural repairs. (For more information on the CWC's flood relief fund, see our story from September 13, "CWC launches $5 million grant program for flood-damaged businesses.")

When the CWC board of directors voted on September 13 to establish the $5 million grant program, they set certain requirements in place:

-The $5 million will be divided between the five counties of the Catskill-Delaware watershed, according to how much watershed land each county contains

-Within each county, the supervisors of watershed towns must decide how to divide the money among the flood-affected towns

-Each business may receive up to a maximum of $30,000 per tax parcel to make structural repairs to flood-damaged buildings

Of the five counties of New York City's west-of-Hudson watershed, only Greene County has decided on how to divide its $931,500 portion of the original $5 million by town. Most of the money will be split between Windham and Prattsville. (A PDF showing dollar amounts going to each affected town in Greene County is attached below.)

The additional $1 million from the DEP will be added to the Catskill Fund for the Future account. Alan Rosa, executive director of the CWC, said that the board had not yet decided exactly how the DEP's funds would be spent, but that it was likely the money would be divided by county according to percentage of land in the watershed, in the same way the original $5 million was divided.

"Under the Catskill Fund for the Future, within the guidelines of the [1997] watershed agreement, that's the way it's supposed to be broken down," he said. "I know that because of the way things are right now, my board is going to ask me to try to figure out how we might be able to get around some of that."

The CWC is also seeking additional private donations for a separate fund that will help flood-damaged businesses get back on their feet, and that may be able to distribute funds differently than the Catskill Fund for the Future. Under the terms of the 1997 watershed agreement, Rosa said, the CWC may not legally give out more than 20 percent of their available funds in grants, and the organization is "pushing that envelope."

Rosa said he is hoping ordinary New York City residents will pitch in to help the towns where their water comes from recover from the storms.

"Tomorrow morning, when nine million people brush their teeth or take a drink of water, think about where your water comes from," he said. "If nine million people would contribute one dollar, that would go a long way toward putting the watershed together again."

Below: The DEP press release announcing a new $1 million donation to the CWC's Catskill Fund for the Future, and a resolution approved by the Greene County Mountaintop Supervisors and Mayors Association dividing CWC funds from the original $5 million grant program between flood-affected towns.