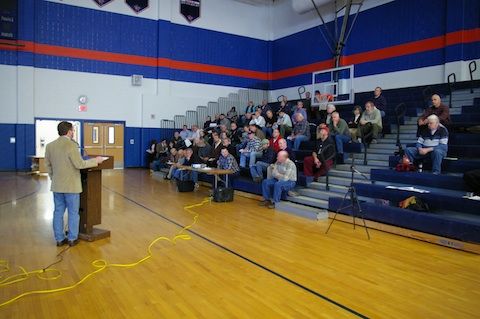 Saturday's meeting of the Coalition of Watershed Towns. Photo and videos by Julia Reischel.

Taking advantage of a “Halley's comet” moment of influence, the Coalition of Watershed Towns has negotiated a new agreement with the New York City Department of Environmental Protection that will prevent the city from buying any more land within some watershed towns, give upstate residents access to resources on city lands, and create a brand-new tax scheme that aims to make sure the city pays a fair share of upstate taxes.

At a meeting on November 13 at the Margaretville Central School, several dozen local officials listened as Jeffrey Baker, an attorney for the Coalition, described the changes it demanded in the city's new Land Acquisition Program (LAP).

This year, the DEP became unusually receptive to the demands of upstate communities, Baker said, because it needs approval from the state Department of Environmental Conservation in order to keep taking water from its upstate reservoirs. The Coalition, which was already negotiating with the DEP because of a lawsuit it filed in 2007, found that the DEP was anxious keep the permit process running smoothly.

“This is like one of those Halley's comet's moments – it only comes around once every few decades or so,” Baker said. “And we have to take that opportunity and use it, because it's when we have our maximum leverage of being able to stop something. And the state and the city recognize that because of our past success in the 1990s.”

The process has allowed the Coalition and the DEP to revisit to the pivotal 1997 Memorandum of Agreement – the contract which shapes the relationship between upstate communities and the downstate metropolis that drinks its water. The new LAP will function as an addendum to the MOA, and when it is signed will end the Coalition's lawsuit against the DEP and prevent it from challenging any other aspect of the current Land Acquisition Program.

Here are the highlights of the agreement:

According to Baker and many in the audience, the most important component of the new agreement is its attempt to solve an age-old point of tension between watershed communities and the city: taxes.

“I think it's some of the most important issues for most of the towns,” Baker said.

Disputes between New York City and upstate municipalities over how much the city must pay in taxes on its watershed lands have drained a $3 million legal aid fund that was established for watershed communities in 1997.

Despite all the court cases, little has been decided in the last 13 years about the fundamentals of taxing upstate watershed areas, Baker said.

“We generally did not get the rulings we wanted that settled fundamental issues,” he said. “And the fund was running dry.”

When negotiations over the lawsuit began in 2007, the Coalition and the DEP soon agreed that there had to be a better way of resolving the fights over taxes.

“We early on agreed that the primary goal is to provide certainty,” Baker said. “The point is that there has to be a fair number in there.”

The Coalition's scheme involves estimating how much the city-owned lands are worth according to a set of agreed-upon tallies of the costs of city ownership. Together, the DEP and the Coalition have created a set of templates listing how much each road, dam, reservoir, and type of land parcel would be worth if they were bought or built today, in today's dollars.

“The whole goal of the template is to remove the subjectivity of the process and to force people to be honest,” Baker said. “We value it as if the city had to build the dams and reservoirs anew, in 2010.”

This analysis is especially tricky when it comes to finding the value of land that now lies underwater, Baker said.

The Coalition has come up with a methodology that relies on old records of land sales to determine a general value for the land as it was before it was flooded to make the reservoirs. Those values will then be increased by a fixed percentage to account for the value of the buildings and the houses that once stood there.

The program, which will be administered by the Catskill Watershed Corporation (CWC) and is voluntary for towns, will require the city to fund any challenges it mounts on the new assessment methods. The CWC will help the two sides work together confidentially to try to reach an agreement.

If they can't agree, the issue can go to court. If the town wins the case by a high enough valuation margin, the city will pay two-thirds of its attorney's fees, up to a cap of $90,000.

“I think it's a fair number,” Baker said. “The costs of litigation are not going to be anywhere near what they were.”

The new tax scheme is just one of many details in the agreement intended to level the playing field between the city and upstate communities.

There are new restrictions on the kinds of land the city can purchase in the watershed. According to Baker, some of the land the city has bought over the years did not met the city's own requirements under the old Land Acquisition Program.

“They were buying things that didn't really qualify,” Baker said.

To keep that from happening, the agreement adds several new “Natural Features Criteria” to the list of features land must have to be bought by the city. This will take about 12,000 to 14,000 acres of watershed land off the table, Baker said.

Seventeen towns throughout the watershed will have the option of restricting the city's ability to buy land within their “hamlet designation” areas. (To see which towns, see page 7 of the PowerPoint.)

Within those boundaries, less restrictive stormwater regulations will also apply. Towns can set their own hamlet boundaries by passing resolutions. Baker has some advice for town officials as they consider doing so:

The town of Shandaken gets a special mention in the agreement. Because so much of the town is already owned by the DEP, the city is prohibited from soliciting new land sales there entirely. (Landowners in Shandaken are still allowed to approach the city to make a sale, however.)

The agreement also has the city loosening up its regulations regarding the resources on city-owned lands. The DEP agrees to lower its fees for recreational use; to allow cell towers, wind towers, snowmobiles, and boating on its property; and to give local communities access to resources such as timber, maple syrup, and bluestone. The DEP, the city, the Watershed Agricultural Council also agree not to receive any royalties from gas drilling on neighboring lands.

The Watershed Agricultural Council gets a transparency makeover in the new agreement, as well as several new programs designed to give farmers a break. The WAC will add mandatory dispute resolution and preference for local land trusts to all its conservation easement agreements, and its meetings will be subject to open meeting laws. Farmers won't have to pay for dispute resolution, even if they lose, and they won't have to implement WAC plans unless the plans are fully funded by the WAC of DEP.

Land trusts are formally allowed to buy land on behalf of the city if the town allows it, but they are bound by all the same rules that apply to the city.

The agreement creates a pilot Riparian buffer program in Greene County, which will experiment with new ways of buying land to protect watercourses. The city will buy strips of land along rivers and streams instead of larger plots.

Baker ended his presentation with a blunt assessment: that this is the best deal that watershed towns are going to get. "It's been a painful process," he said. "But I think we're very satisfied with how we came out on this."

The comment period on the DEC's permit ends on November 22. Read the draft permit and get more info here.