Above: A crane lifts a Delaware & Ulster engine into the air on Wednesday, Oct. 14. Photos by Rebecca Andre.

The 2015 season of train rides aboard the Delaware & Ulster Railroad, a scenic railway that runs from the Delaware County hamlet of Arkville to the town of Roxbury, was forced to end unceremoniously early this year due to "mechanical difficulties," according to DURR president Dave Riordan.

Major repairs are necessary on three of the railroad's engines, said Riordan, who was at DURR's Arkville headquarters on Wednesday, Oct. 14 overseeing repairs. Around noon, a giant crane lifted one of the engines into the air.

Above: A crane lifts an engine. Photos by Rebecca Andre.

The last DURR train ran on Sept. 23, according to Heather Wright, the head conductor.

The mechanical troubles caused the railroad to cancel rides over Columbus Day weekend, normally one of the busiest tourist weekends in the Catskills. Wright said that the DURR lost at least 300 passengers by cancelling last weekend.

"We have recently had several major mechanical problems," read a notice on DURR's website. "Safety is our number one concern and our decision to suspend operations for the rest of 2015 was difficult but necessary."

The DURR's organizers expect the railroad to re-open next spring.

"We are expending major repairs and looking forward to a spectacular season in 2016," Riordan said.

Below: More photos of today's repairs by Rebecca Andre. 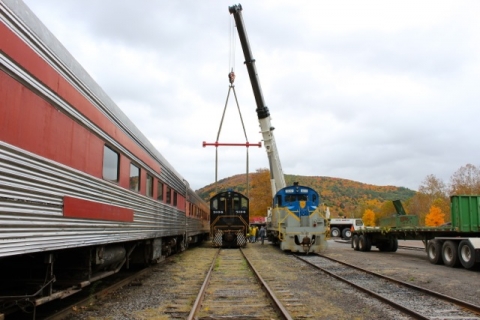 DEP to put up $2.5 million for Ashokan rail trail