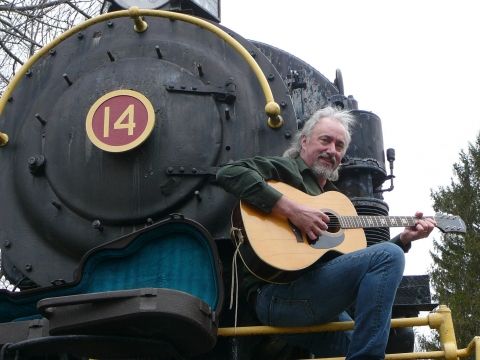 The Delaware & Ulster Railroad, a tourism railroad that runs from the hamlet of Arkville to the town of Roxbury in the Delaware County, was forced to end its season early this year after mechanical troubles derailed three of its engines in September. Now a group of locals is banding together to raise funds to help the railroad back on its feet.

This Sunday, Dec. 13, local musician and railroad fan Ben Rounds is throwing a free "Locamotive Benefit Concert" in Fleischmanns to raise money for the D&U. You can stop by La Cabana Restaurant to listen to some tunes and contribute between 1 p.m. and 4 p.m. While you're there, consider joining the Ulster & Delaware Railroad Historical Society, which oversees many projects related to the D&U.  (Watershed Post contributor Rebecca Andre is one of the event's organizers.)

Rounds is a longtime fan of the D&U. A song about the last time the railroad survived a challenge to its infrastructure appeared on one of his albums:

Above: "Train Used to Run," a Ben Rounds song about the Delaware & Ulster Railroad.

In 2011, Tropical Storm Irene damaged a section of its track and put the railroad out of commission for the rest of its 2011 season. The railroad reopened in May 2012, according to Wikipedia.

Currently, the D&U is planning to reopen for its 2016 season. It's also hoping to raise $25,000 to help keep its operations going.