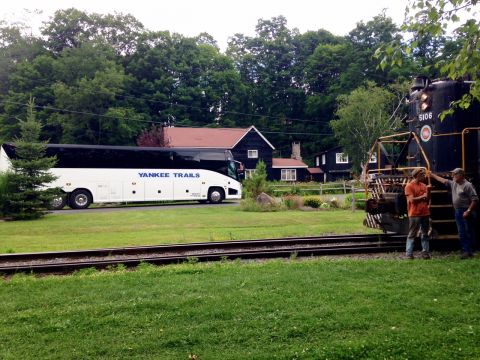 Above: A tour bus picked up stranded Delaware & Ulster Railroad passengers in Halcottsville on Friday, July 29. Photo by Rebecca Andre.

A locomotive pulling a private charter for the Delaware & Ulster Railroad broke down around 2:30 p.m. on Friday, July 29, stranding its passengers in the Delaware County hamlet of Halcottsville.

The incident was the latest in a string of mechanical failures that have sidetracked DURR’s 2015 and 2016 seasons.

DURR had to end its 2015 season early due to breakdowns. This year, a mechanical failure on the Fourth of July weekend delayed the beginning of the 2016 season for three weeks, according to a representative of the Catskills Revitalization Council, the nonprofit organization that runs the railroad.

Now, the railroad’s operation is delayed again. According to an outgoing message on DURR’s answering machine, the regular service of the railroad will happen “in early August.”

Above: Locomotive number 5106 broke down in Halcottsville on Friday afternoon during a private charter. Photo by Rebecca Andre.

On Friday, a recently repaired bearing on the number two axle of locomotive number 5106, which also caused trouble on a ride during the Fourth of July weekend when it “caught fire,” starting heating up again, according to Vic Stevens, engineer and chief mechanical officer for DURR.

"Everything was fine on the way up," said Stevens of the Friday excursion to the town of Roxbury, where the tourist train turns around and returns to Arkville.

It was on the return trip that the faulty bearing struck, Stevens said. He noticed the temperature of the axle rising and made the decision to stop the train in Halcottsville for safety reasons, he said.

According to Stevens, passengers waited for about 20 minutes on the lawn of Susan's Pleasant Pheasant Farm, a kayaking venue, until a tour bus pulled up to ferry them back to Arkville.

"It was the safest place to stop," said Stevens.

Above: Matthew Gray, a track crewman, and Vic Stevens, the engineer and chief mechanical officer, wait with the stranded engine in Halcottsville. Photo by Rebecca Andre.

Locomotive number 5106 is 63 years old and still possesses most of its original parts, Stevens said. Last year, the bearing of the locomotive’s number one axle broke down and needed replacement before the 2016 season, he said.

Above: Engine 5017, another DURR locomotive, awaits a new radiatior in Arkville. Photo by Rebecca Andre.

Costs of these repairs are very steep. Grassroots fundraisers, including one run by the author of this article, have popped up in the past year in a effort to ease the financial pressure brought on by the disabled locomotives.

When asked to comment, Dave Riordan, the president of DURR, expressed gratitude for these efforts and pointed to the DURR website, where donations are being accepted.