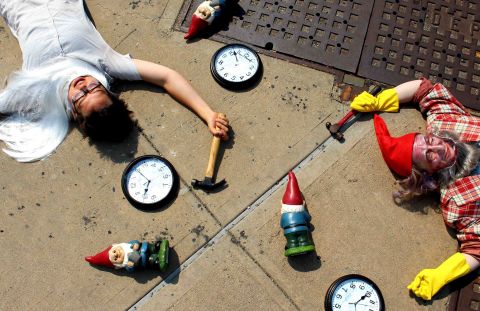 Upstate New York and its urban neighbor to the south have always had a fraught relationship. The Catskills sends its water down to the city, the city sends its leaf peepers up to the mountains, and the Hudson River flows both ways. Now Is the Time. Now Is the Best Time. Now Is the Best Time of Your Life., a performance piece from Brooklyn troupe Little Lord, attempts to examine this relationship, along with the history, folklore and pop culture of both New York City and Upstate, from Rip Van Winkle to Borscht Belt comedy to Billy Joel to Dirty Dancing. Oh, and also the existential crisis of time and existence. No big.

Now Is the Time is narrated by Diedrich Knickerbocker, a fictional historian invented by Washington Irving in the early 19th century. Like Irving's Knickerbocker, this one is writing a long, fussy chronicle of New York from Dutch settlement to…well, in this case, the distant future. As played by Michael Levinton (who also directs), Knickerbocker meanders through piles of cardboard boxes, papers and historical detritus, frantically quoting and listing — everything from folk tales to movie lines to lists of food. He's aided (or haunted?) by Rip Van Winkle (Lisa Rafaela Clair), a lurid 1960s hausfrau, and a cadre of the creepiest living lawn gnomes you ever did see.

Diedrich seems very distraught about…well, everything, but it's hard to care about his anxiety when he's expressing it through Dirty Dancing quotes and declarations about the depth of the Hudson River. Upstate (and, occasionally, the city) is more of a character in the show than the characters themselves, who seem to exist only to paint an audiovisual tone poem about the cultural history of the region.

Still, some of those moments can be pretty arresting: the gnome chorus materializing to whisper-sing a deeply creepy nursery rhyme, or the housewife screeching and waving many arms like a Borscht Belt Kali, or Rip Van Winkle singing a melancholy rendition of "New York State of Mind." Peiyi Wong's busy set design evokes a Catskills resort in the wake of a hurricane, complete with a mountain of overturned deck chairs and a battered baby grand.

But after a while, the apparent randomness of all these displays grows exhausting. Little Lord seems to be trying to say something about the melancholy of loss and the impossibility of reclaiming the past, but it gets lost amidst all the detritus. Now Is the Time is high on style and full of ideas, but unfortunately with little that's substantive for the audience to hold onto.

What to do in the Catskills for Halloween