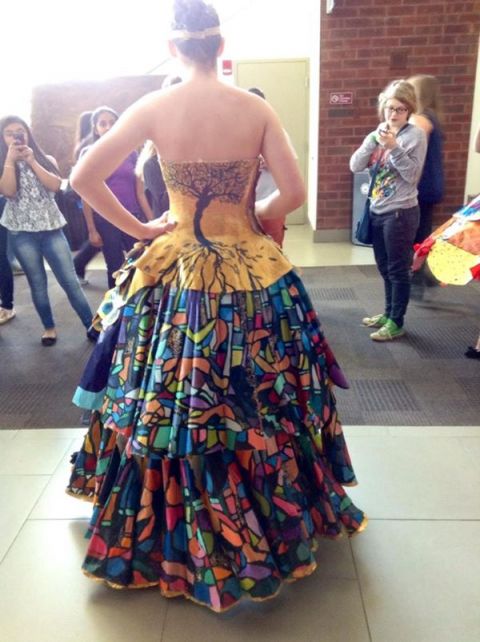 Above: Katlynn Shamro models Margaretville's winning dress design at the competition in Saratoga Springs on April 10, 2014. Photo by Michele Dietz.

A team of high school fashion designers from Margaretville Central School took top honors at the New York State Olympics of the Visual Arts last week with an elaborate Art Nouveau dress made entirely out of paper.  The dress, pictured above and below, featured a hand-painted design featuring peacocks and a Tiffany lamp motif.

The Margaretville high school team beat 18 other teams from across New York State to win the fashion competition -- the most competitive category, according to Michele Dietz, the art teacher who coached them. Their challenge was to create a "big, bold, colorful pattern" that was inspired by a period in art history, and Margaretville's high school team chose Art Nouveau.

"Art Nouveau really isn't comprised of art in the traditional sense," Dietz wrote to the Watershed Post in an email. "It encompasses architecture, furniture design, jewelry design, arts and crafts -- more than just paintings on canvas. Tiffany lamps and Tiffany jewelry are a prime example of Art Nouveau pieces. It's all about dramatic whiplash curves and whimsy patterns, very elegant and pretty."

Several other Margaretville teams went to the competition, which was held on Thursday, April 10 in Saratoga Springs.

"It was tough competition this year, with at least fifteen to twenty teams competing in each category," said Wentland in an email to the Watershed Post.

Funds from the O'Connor Foundation and the Michelle MacNaught Fund supported the students who entered the competition. 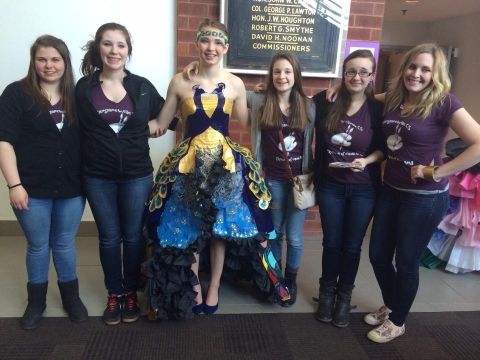