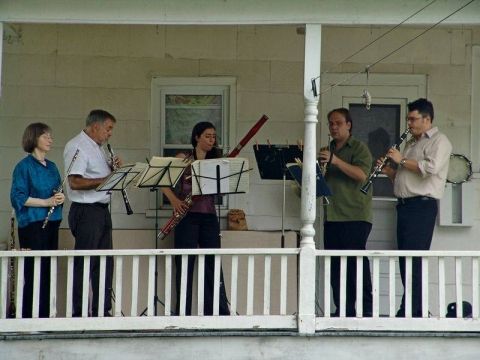 Chamber music is the place where classical composition meets jam session; played well, the result is a sort of deep discussion of the piece held entirely through notes and phrases and improvisational licks. Chamber music lovers have some high-octane opportunities to bliss out this week, as two topflight organizations celebrate their 20th anniversaries.

"It’s a completely different thing than an orchestra being conducted or a band with a drummer,” says Andrew Waggoner, artistic director of Transformations!, a summer festival by Weekend of Chamber Music going on right now in Sullivan County. “There’s no central point of reference to look to or hang all of your expectations on. The individual performers need to listen and respond to each other in a way that gets very, very intense. It really requires open communication in the moment to a degree that symphony or big band playing don’t."

The “music of friends” began as an aristocratic pastime; after all, how many musicians can you fit in the palace chamber? But as palace chambers and royal patronage declined, chamber music continued to thrive, never becoming exactly mainstream but never dying out.

"I know it’s a cliché to say you attract a diverse audience, but we definitely do,” says Waggoner, who tried his hand at composing before he was eight years old and has been utterly consumed by music since puberty. "People who grew up here, city folks, artists, construction workers."

Weekend of Chamber Music has been running since July 14, but it’s not too late to get in on the fun for any or all of the next three days of peace, love and music. Waggoner will be moderating “Music Talks!,” a blend of panel discussion and performance with several renowned players/composers of the form including (but not limited to) Pulitzer Prize winning composer John Harbison, at the Catskill Distilling Company in Bethel on Thursday night, July 25. The audience is very much invited to join the discussion with questions or observations -- after all, back in the day, musicians in the palace chamber probably let the members of the royal court add their two cents.

On Friday, all are invited to an “intimate open rehearsal” at the Eddie Adams Barn in Jeffersonville, to watch and listen as Harbison and company journey toward Saturday’s grand finale: The world premiere of Harbison’s newest composition, along with helpings of Bach, Mozart and Stravinsky. Friday’s rehearsal is free, but may just whet your whistle for Saturday’s glories, which include a gala reception.

If you still haven’t had enough, the Shandelee Music Festival has something special planned on Sunday. Three stunning young pianists -- Claudia Hu, Helen Chen, and Doris Lee -- will bring a Carnegie Hall-quality performance to the Event Gallery at Bethel Woods Center for the Arts.

"Chamber music lovers tend to be individualists," he says, "people who are respectful of different points of view and lifestyles. There’s something very Woodstock about it in that sense. New people come in and add their own very different contributions, but at the same time it’s as if they’d always been there. We may have absolutely nothing or everything in common besides the music, but the music pulls us all together."

The Shandelee Music Festival continues through August 17, with a series of sunset concerts on their 75-acre festival site in Livingston Manor. Each one is a chance to see internationally-renowned young musicians in a friendly, intimate setting. Highlights include an August 1 show by the Jupiter Symphony Chamber Players -- a group that, as the New York Times' Allan Kozinn puts it, "revels in dusting off obscurities" -- and an August 6 performance by the Attacca Quartet, a Juilliard-based string quartet with a yen for the contemporary.