This weekend: The Eight Track Museum opens in Roxbury 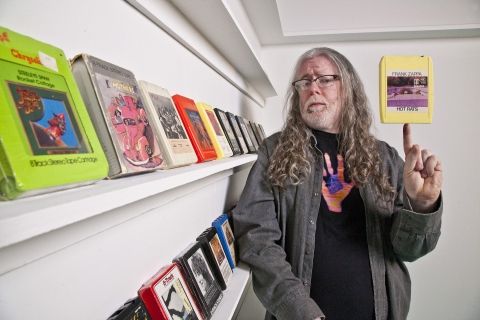 Above: Bucks Burnett, founder of the Eight Track Museum, with a Frank Zappa eight track. Bucks will be on hand at the opening of the Roxbury outpost of his museum this weekend. Below: The rare Sinatra/Jobim eight track. Photos by Robert Greeson.

The Catskills, with countless forgotten valleys and cheap real estate, is a magnet for obsessives. People come up here, buy a building, and then fill it with their treasures.

This makes for a land full of bizarre roadside attractions: there’s a museum shaped like a giant bobcat made of sticks in Catskill, a furniture store that makes spaceship cars with retro fins in Boiceville, and a "shrine to clutter" called the Mystery Spot in Phoenicia, just to name a few.

The newest addition to the list of Catskills oddities is the Eight Track Museum, a public homage to the obsolete audio format, which opens this weekend in the Delaware County town of Roxbury.

Roxbury’s new venture is an outgrowth of the original Dallas incarnation of the Eight Track Museum, which Bucks Burnett opened in 2011. The Catskills version is the dream of former punk rocker -- and longtime Woodstock resident -- Phil Lenihan.

Lenihan, who bought a long-vacant corner store in Roxbury several years ago and rehabbed it this summer, will run the museum in partnership with Burnett, but he is giving the Catskills location a glamour all its own.

The Roxbury museum’s prize is a rare 1969 album featuring collaborative songs by Frank Sinatra and Antonio Carlo Jobim that was released on eight-track before being recalled and destroyed (possibly at Sinatra’s request). The album never made it onto any other formats in that form, according to Lenihan -- making it the eight-track equivalent of a rare misprinted stamp, prized by collectors.

The Sinatra/Jobim, as it is called, will be reverently displayed alone in its own special room in the museum.

The Roxbury museum will also working on a timeline of the history of the eight-track, and exhibits about the format’s close relationship with the auto industry and with audio bootleggers.

Because Lenihan is camera-shy, we interviewed his co-museum-owner, Bucks Burnett, about the new Catskills outpost of the museum. Burnett will be in Roxbury this weekend at the museum’s grand opening -- along with Tina Weymouth and Chris Frantz of the Talking Heads and the Tom Tom Club.

Bucks Burnett: Why the hell not? The middle of nowhere is almost always more exciting to me than the middle of somewhere.

WP: Had you heard of Roxbury before Phil Lenihan told you he wanted to open a branch of your museum there?

BB: No. But I’ll be there before the show helping Phil complete his masterpiece.

WP: How did you meet Phil?

BB: He had some business in Dallas the past year or two, and he would come by on Sundays and we’d just sit around and chat. He had always been very generous and supportive to the museum, and he hatched this hairbrained idea to start a branch of the museum in Roxbury. I think it’s going to be even better than the Dallas museum. I say better in the sense that Phil is doing all the work and I’m getting all the credit.

WP: The centerpiece of the Roxbury museum is the rare Sinatra/Jobim eight-track. Who owns that, and how did you guys get a hold of it?

BB: Who cares who owns it? Who gets to show it off! Phil and I have a common philosophy. He buys some of the stuff; I buy some of the stuff. Ultimately, we truly believe that we buy it for the museum.

BB: In the 1960s, there were about five tape formats introduced simultaneously. You had the eight track, the four track, the two track, the reel-to-reel, and the cassette tape. A lot of people laugh at the eight track as this outdated, clunky thing from the 1970s. But in the context of the mid-60s, it was the first music format you could play in your car. The significance of that is really lost on a lot of younger people -- they’ve got 20,000 songs on their iPod. But in 1965, it was magic. The makers of the eight track signed the most exclusive agreements with the most auto manufacturers first. There were no home players for eight tracks until 1967. For two years, it was a car-only format.

WP: What do you say to skeptics who don’t see the appeal of a museum dedicated to an out-of-date audio format? Why are eight-tracks special or worth remembering?

BB: You’re more than welcome to go to a cassette museum instead, if that’s your preference. This reporter for the Dallas Observer, who shall go nameless, he kept asking me that question. He kept thinking he was going to drag a clever answer out of me. Why is this museum so important? I said: “I’m going to need the name of the idiot who told you it was.” I have never, ever told anybody this museum is important. Now, some of the things in the museum could be important. Little things like preserving every single audio format ever created by our species. That’s a little important.

The Orphic Gallery and the Eight Track Museum are Watershed Post advertisers.