Homer & Langley's Mystery Spot in Phoenicia is one of the more unexpected networking hot spots in the Catskills for creative, artist, and musician types. Head into the store on a given weekend and you might meet the managing editor of a national literary magazine, a renowned illustrator, or the actress best known for her work as a lesbian hearthrob on Showtime's "The L Word."

Part thrift store, part antique shop, all altar to the gods of hoarding, the Mystery Spot is the overgrown hobby of Laura Levine, a Phoenicia part-timer (she has a studio near the village) who calls herself a "junkmonger." She takes her inspiration from the Collyer brothers, famous hoarders whose first names she bestowed on the store. (Below is a painting about Homer and Langley Collyer by Levine which hangs in the shop.)

Levine made her name in the 1980s as a rock photographer who was capable of coaxing iconic and intimate images out of pop stars like Madonna, Bjork, and Sinead O'Connor. (She is also an illustrator, a filmmaker, and a painter. For her full oeuvre, see her website.)

But Levine has always nursed a collecting habit, starting in her childhood spending summers in Catskills auction houses. She started selling antiques 15 years ago at the now-defunct Phoenicia Antique Center. That grew into a shop of her own in Phoenicia, and last year the Mystery Spot moved to its current home smack dab on Main Street. These days, in addition to selling the knick-knacks, vintage clothing and old-school vinyl records that stuff the space to the gills, the Mystery Spot hosts a music series in the summer in which big-name musicians set up on the front porch and play for free.

The last front porch show of the season, featuring Ambrosia Parlsey, Chris Maxwell and Phil Hernandez, will be this Sunday at 1pm, and the store is having a 20% off sale to celebrate. We talked to Levine about the Mystery Spot's 9th season in Phoenicia and how it got there.

Watershed Post: First of all, did your store sustain any damage in the flooding that hit Phoenicia last week?

Laura Levine: No, thankfully, not. The driveway got totally washed away. It's a giant pit there now. The water didn't come up on the porch, It didn't go into the store at all. The town became a real dust bowl afterwards, though. Over the weekend, there was just dust on everything. If you parked your car on the street for a few hours, when you came back, it was covered with dust, because the river brought all the silt with it.

WP: So why did you start a "shrine to clutter"?

LL: It wasn't a decision, really. What's that quote? "Some choose greatness, and some have greatness thrust upon them?" I had a little booth at the antique mall on Rte. 28, and then they closed. I basically had a month to decide what to do with all my stuff. It was kind of a fish or cut bait situation: Should I get rid of everything or take it to the next level?

WP: Your sensibility -- "eclectic" isn't the right word for it. It's really downright bizarre. Where does that come from?

LL: I do have a very specific aesthetic. I would never go so far as to say that the Mystery Spot is like an art installation, because that just makes it sound boring and pretentious, but there is definitely an aesthetic sense to it. There are certain things in the store that are not for sale, like the flying alligator and the flying alligator trap, and Petey the piranha, and the Devil Girl of Phoenicia. It's taking its inspiration from a 1950s tourist trap, including the name. I wanted something that wasn't just a boring "Ye Olde Antique Shoppe" name.

WP: You have a huge stash of records that you're gradually bringing into the store, is that right?

LL: Yes, there was an estate with 15,000 records. That was a few years ago, and I'm still bringing them in. I weed out the generic stuff, and I put it out on the porch in the dollar box. There's a bunch of stuff on the porch that is just out there all day and all night on the honor system. The store used to be a video store, and there's still a video drop box, so people just leave money. It's awesome. Sometimes, we open up the store on the weekend, and there's $20 waiting.

WP: How much of your time is spent weeding through your raw inventory?

LL: Probably more time than I should be spending, frankly. Last week, I got an estate call. It was a physician's estate, and there were all these old medical books from the 1930s. There was a Gray's Anatomy from 1930, I think it had 1200 engravings and illustrations. It was gorgeous. I'll spend half an hour looking through the book.

WP: Are antiques like ice cream? If you sell them, do you get sick of them?

LL: No. There's so many different stripes and colors. You never know what you're going to find. The other day, I must've bought about 300 antique bottles. They all came out of a barn. I literally washed every one. I did keep about a dozen for myself, and the rest of them went right into the shop. Suddenly it will be bottle week, and the next week it will be medical book week.

WP: How did you get the idea for the front porch concert series?

LL: I suddenly realized that I was on Main Street, and I had this great venue, and I have all these friends from the music business from the years that I photographed bands. For the most part, it was just inviting friends or friends of friends, and I've been kind of amazed at the people who agreed to do it. They do it for barter from the store, and the shows are free. 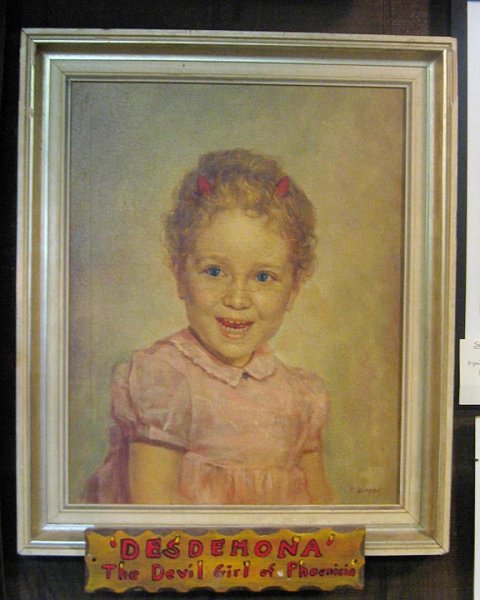 WP: How do you know Ambrosia Parsley?

LL: I have known her husband, David Ayers, for years and years and years, going back to when he worked at a record label. I just said, "How would you like to play the porch and get lots of vintage stuff?" I'm very excited about this show. I think there will be all kinds of new, exciting music debuted.

WP: What's your favorite item in the store?

LL: The painting of Desdemona, the Devil Girl of Phoenicia. She's right behind the counter. It's a painting from the late 1950s of a little blonde girl in her little pink dress, but somebody -- my theory is it was her brother -- later added little devil horns and a cleft tongue. You really have to look carefully. I've had a lot of people try to buy her from me, but she's absolutely not for sale. I paid $15 for her. She's priceless. I would never sell her.

The Mystery Spot is open this weekend from 11am to 4pm on Friday and Monday and 11am to 6pm Saturday and Sunday. The free Music for Front Porches show is on Sunday at 1pm.  Levine is always looking for new inventory, so if you have some extra vintage, give her a shout.