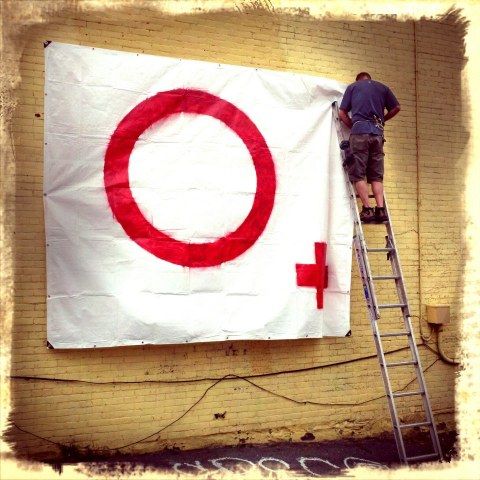 It all started with a Kingston dentist who just really wanted an indie band to play in his hometown. Three years later, the O+ Festival is becoming a juggernaut.

This year, the annual O+ Festival -- a citywide celebration of art, music and healthcare for everybody -- is bigger than ever. The festivities kick off at 6pm on Friday with a grand parade, from the Kirkland Hotel through the streets to the BSP Lounge, led by the Hungry March Band. (Expect skeleton puppets.) After the parade winds down, revelers will fan out to half a dozen venues, and the party will roll on. There's a concert at the Old Dutch Church featuring Richard Buckner and the Felice Brothers, up-and-coming local bands at BSP Lounge, and rocking into the wee hours with Mercury Rev's Grasshopper at the Stockade Tavern.

That, in itself, would be a banner night out in Kingston. But it's just the start of a weekend-long creative typhoon that will take Olde Uptown by storm.

On the festival's Facebook page, the excitement is palpable. People are posting links to music and photos and art, and organizers are executing the final logistical wizardry of transforming uptown Kingston into a three-day extravaganza of joyful self-expression.

“We pass jobs around, ” says co-organizer Joe Concra. “This year I'm overseeing -- on my emails I've been using the name 'Skipper' -- but everybody wears many hats. I'm pasting up artwork as we speak.”

Concra's paste-up crews will be working around the clock for the entire week leading up the the festival.

This year, the festival is sporting a few new features. New venues like the Stockade Tavern will be joining perennial favorites like Keegan Ales. A health expo will be open to the public, and a nutritionist will give a guided lecture tour of the Farmer's Market on Saturday. An Art Bus for kids will offer printmaking and painting. You can try one of 11 different kinds of yoga, take a burlesque drawing lesson from Dr. Sketchy's Anti-Art School, or get a an “Art/Life” counseling session from Linda Montano. You can partake of a TMIdol Story Slam with the intriguing theme “From Bad to Worse.”

“She sits in a shop window and talks to you about your life, ” says Concra, “and it's just amazing. There's a lot for people to do this year besides just hear music and see art. ”

The sheer quantity and quality of music and art wreathing the neighborhood is breathtaking. Forty bands will be rocking at a range of venues within easy walking distance of each other. Giant murals are transforming once-bland expanses of concrete. Installations and exhibits will be everywhere one looks.

Above: Time-lapse footage of a pop-art Imperial Stormtrooper created by local artist Andy Milford for O+.

And then there's the feature that's drawn major media attention, from Oprah to the Wall Street Journal: Bartering for medical care. Jamming out in their own way, 55 health care providers will staff a popup clinic for performers, artists and festival volunteers, who earn clinic sessions in exchange for their services.

“We're responding to what the demographic needs and likes, ” says Dr. Art Chandler of the mix of modalities, which range from dentistry and chiropractic work to stress relief and PTSD screening. There will be acupuncture and reiki and massage, and, for some, the chance to get a much-needed pair of glasses.

Chandler said the care offered extends beyond the festival itself, when artists and performers will get to visit a local clinic of their choice.

“We try to help people see what they need, and then provide vouchers for followup care. We're working with MidHudson Family Health, Health Care As a Human Right, and Family of Woodstock on that part,” Chandler said.

“People get out and discover venues and places they never knew existed and talk to one another. The restaurants do great," he said. "And this area, over the last few years...There's a vibe to it. I think O+ helps.”

While the idea of celebrating art and healthcare together may seem novel, the two are connected, said Chandler.

“Whatever is comforting and thought-provoking and beautiful is also healing -- that's self-evident, ” Chandler said. “Art and music are as important as medicine. They're held in less financial regard but for no good reason. Whole historical eras are defined by the art and music created -- it's what makes the communal life richer -- and we need to make sure our artists' well being is assured, so that they're comfortable in the community and continue doing what they do.”

The O+ Festival runs from 6pm on Friday, October 5 through 9pm on Sunday, October 7, throughout Kingston's Stockade District. See the O+ website for a detailed schedule, map, and previews of the attractions. A $25 wristband admits festivalgoers to dozens of musical performances, art tours and hands-on demonstrations, yoga classes, and much, much more. Many events, such as the Health Expo, the Art Bus, and a Saturday noontime kids' show, are free and open to all.