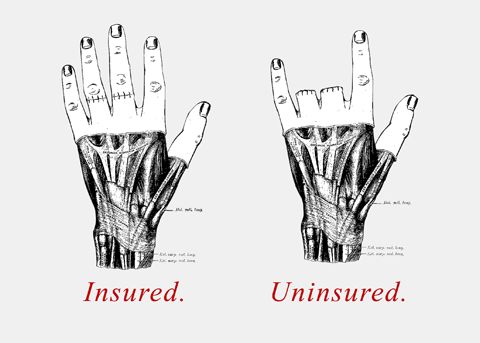 Throughout Columbus Day weekend, O+ will showcase a diverse array of works by artists and filmmakers, including a seven-hour performance art piece called Glandathon, which will feature cameos by Woodstock herbalist Susun Weed as well as several local doctors. Dozens of bands are playing, including local heroes Mike + Ruthy, Woodstock alt-rock legend Tracy Bonham, and rising stars of the twang-folk world Phosphorescent. Instead of pay, the musicians and artists whose work fuels the festival will be getting free treatment, generously donated by a crew of local doctors and other healthcare providers.

Odds are none of it would have happened without local dentist Tom Cingel, a '96 Onteora grad who recently moved back to the area and bought David Fletcher's Kingston dental practice. Cingel didn't mean to set a healthcare revolution in motion – he just wanted to see some Brooklyn indie band play in his hometown, so he offered to fix their teeth. What happened next? Like the Man said: Ask, and ye shall receive.

Watershed Post: I heard this whole thing got started because you liked some band at Truck so much that you told them you'd fix

their teeth if they played in Kingston.

Dr. Tom Cingel: It's interesting -- the band, Monogold, doesn't need any healthcare, but their manager does. So we'll be treating the manager. After Truck, I decided to send an email to Monogold requesting that they play Kingston in exchange for dental care. Their manager immediately contacted Alex [Marvar]. Alex and Joe [Concra] were mulling the idea of having a festival in Kingston anyway. So when I met Joe at a party, he said, “You're the dentist who wants to trade dental work for music!”

TC: I'm getting married in a week. When we were thinking of the date [for the festival], I said, “Please don't put it on the 2nd.”

WP: Whoa. I hope you're not missing your honeymoon?

TC: No. My wife-to-be is in nursing school, so she can't go anywhere until winter break.

WP: Tell me about the O+ Festival. What's the goal?

TC: My goal was to get music into Kingston. It seems like all the good bands skip Kingston. They'll play New Paltz, Woodstock, Bard College, Albany, but they skip Kingston. A lot of people agreed. And they said, “Let's do something at the same time for the artistic community.”

If we can repeat another festival next fall, that would be wonderful. But we want to continue O+ in the artistic sense, in terms of continually attracting artists to the Kingston area. This is going to be a new chapter in the way artists view Kingston.

WP: There's a lot of very cool stuff going on in Kingston. But it's kind of a schizophrenic town.

TC: It could use some help. There are different areas. There's nice neighborhoods, there's neighborhoods you wouldn't think would be awesome. It doesn't help that the railroad goes right through the middle of the city.

TC: Joe's wife, Denise Orzo, that's her blood type. She mistakenly thought that her blood type was the universal donor. It's about giving, this festival, and we thought it would be nice to give a little back. When we realized the universal donor is actually O-negative, we said, “Oh well, we're going to stick with O-positive because we want to stay positive.”

WP: Musicians and artists contributing their art in exchange for healthcare: How is that going to work in practice?

TC: We made a wish list of all the artists' needs. We asked them, do you need to see a physician? A dentist? A chiropractor? We'll be treating people either in uptown Kingston or in people's private offices. And we're also making doctors available to people post-festival. We have almost everyone, except an optometrist. We can't get an optometrist. I don't understand. Those guys must be all business. The best deal I could get was 20 percent off frames. Are you kidding me?

WP: Not to rain on your parade, but this isn't going to fix the healthcare system. What happens if some poor uninsured artist gets a free checkup and it turns out they have cancer?

TC: Our plan is to connect them with a doctor who would see them for nothing, or next to nothing, minus the costs of the pharmaceutical care they may need. If they need to see a cancer specialist, the physicians know all the specialists in the world, they all know who is willing to give one patient a break.

Also, on Saturday we are having a health access fair from 9am to 7pm, and we have a variety of organizations that will connect people who do not have insurance with either low-cost or free health insurance, and connect them to organizations that would be able to screen them for routine care. That's mostly through Healthy NY. Fractured Atlas is coming also.

My ultimate goal, that I think would be wonderful and beautiful, would be to have an artists' healthcare clinic in Kingston, open a few times a month, or on an as-needed basis. That would be phenomenal. But for now, we're happy to treat the artists who are coming into town for the festival.

O+ Festival runs from Friday, October 8 through Sunday, October 10 at over a dozen Kingston venues. Check the schedule to see what's happening where. Hospital wristbands that will get you into every show on all three days are $25; you can reserve them on the O+ website, or buy them in the flesh at Rhino Records (New Paltz), Woodstock Music Shop, Wright Gallery Records (Kingston), or Elephant (Kingston).

Our interview with Dr. Cingel was edited for clarity. We kinda rambled on.