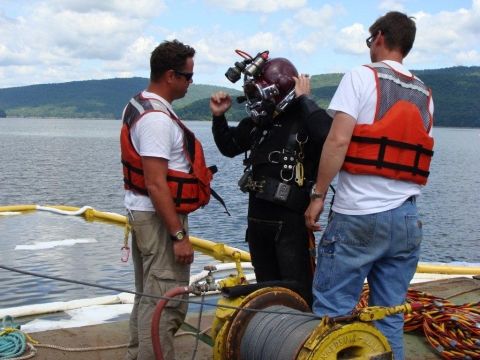 Above: A cleanup team at work at the site of a diesel fuel spill in the Pepacton reservoir. Photo by DEP regional manager Mark Danvetz.

No sooner had the New York City Department of Environmental Protection finished cleaning up 2,500 gallons of diesel fuel from the Pepacton Reservoir than another source of contamination was found at the bottom of the reservoir.

The cleanup of the Pepacton has been going on for over two months. Evidence of an oil spill near the East Delaware Tunnel intake was first found on Sunday, April 29, according to an article in the Walton Reporter. On Friday, May 18, the DEP announced that the source of the leak had been found: a pipe protruding from a large object buried in sediment at the bottom of the reservoir.

Today, the DEP reports that divers from Moran Environmental Recovery have finished removing 2,500 gallons of diesel fuel from the bottom of the reservoir. But on Sunday, a DEP press release said, the divers found an additional pipe near the site of the first leak. When tapped, the pipe was found to be full of what the agency believes to be gasoline.

The DEP has plugged the second pipe, and will begin to remove the gasoline on July 13. In the meantime, the area continues to be surrounded with containment booms, and no water is being sent to the Rondout Reservoir through the East Delaware Tunnel.

Because no water is being sent through the East Delaware Tunnel, the DEP announced, a greater amount of water will be released from the reservoir over the Downsville Dam starting today. From the press release:

This change will ensure that the Delaware River flow requirements will continue to be met and at the same time maintain the overall balance of the water supply system.

The press release states that the Pepacton's water quality is being monitored, and that the leaks pose no threat to public health.

The ongoing cleanup has not put a damper on the Pepacton's new recreational boating program, which just began this year. So far this season, of the four NYC reservoirs open to small boats, the Pepacton has had the most boaters. 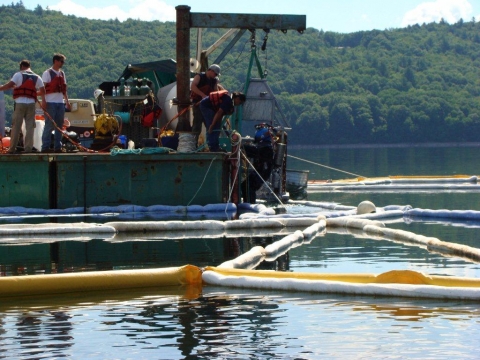