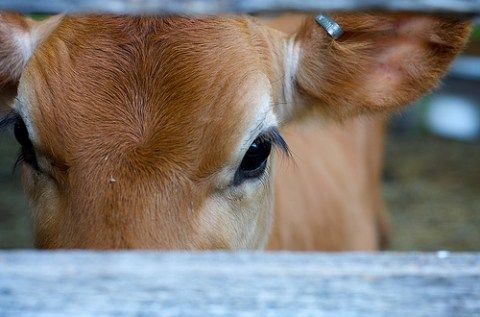 Q: How is a milk cow like a fax machine?

A: She can be written off as a business expense. And under a new federal law proposed by U.S. Senator Chuck Schumer, D-NY, more of New York State's roughly 600,000 working dairy cows would get deducted annually from the farm bottom line as "capital expenses."

The bill, which Schumer plans to introduce, is aimed at helping not just dairy farmers, but several New York State Greek yogurt manufacturers that have been growing rapidly over the past several years, and showing an insatiable appetite for New York State milk.

Currently, the only time a cow can be written off as a capital expense is when she's just getting started in her dairy career. Once she's already producing milk, even if she changes hands, the buyer cannot write her off as a business expense. (That's a difference between cows and fax machines: A business can buy a used fax machine and deduct it as a "capital expense" on the company's taxes.)

Schumer's legislation, the Dairy Augmentation for Increased Retail in Yogurt Products Act (which almost works out to the acronym DAIRY), aims to change that. A press release on Wednesday, March 14 from Schumer's office has a detailed description of how the bill would work. Here's an excerpt:

For 2012, dairy farm operators can immediately deduct 50 cents of every dollar spent on qualifying livestock purchases, which include the purchase of any ‘new’ dairy cow not previously used for a business purpose.  However, dairy cows purchased from another herd do not qualify for this generous tax benefit.  Schumer’s legislation would expand the definition of qualifying livestock eligible for 50 percent bonus depreciation this year to include all dairy cows purchased by a dairy farm operator for business use, regardless of whether the dairy cow’s original use had commenced with another taxpayer.

The bill would also establish tax-deferred savings accounts for dairy farmers, to help them keep their finances stable in a wildly fluctuating market.

While yogurt companies like Fage and Chobani have shown a bottomless appetite for local milk, the laws of supply and demand don't work neatly on the complicated business of commodity milk pricing. A recent investigation by WBNG found that despite soaring demand for New York State milk, local farmers aren't seeing better prices for their milk:

...the net price of milk in New York is lower than the national average and lower than that of neighboring states.

"Now that we've exhausted our milk supply in New York State, we've gone in to Pennsylvania and surrounding states," said Kelly LaCorte, spokesperson for Chobani, who spoke with Action News at a recent event in Binghamton.

Data from the USDA puts New York's milk price at nearly $1.00 below that for Eastern PA, and $1.40 for states in New England. "You would think they would want to pay more money for local milk and have the better quality," [Sherburne farmer Josh] Lathrop said.

Crackdown on safety problems at Chobani

In other yogurty news: Agro Farma, the company that makes Chobani yogurt, may need to slow down its rampant growth for a while and focus on plant safety. The company faces $178,000 in federal fines for health and safety violations at its plant in New Berlin, the Daily Star reports today:

"Our inspections identified a wide range of mechanical, chemical, electrical and health hazards that, left uncorrected, expose the plant's employees to being caught in moving machine parts or unexpectedly energized machinery, electrocution, falls, being overcome in toxic or oxygen-deficient atmospheres and hearing loss," [Occupational Safety and Health Administration] Area Director Christopher Adams said in a statement.